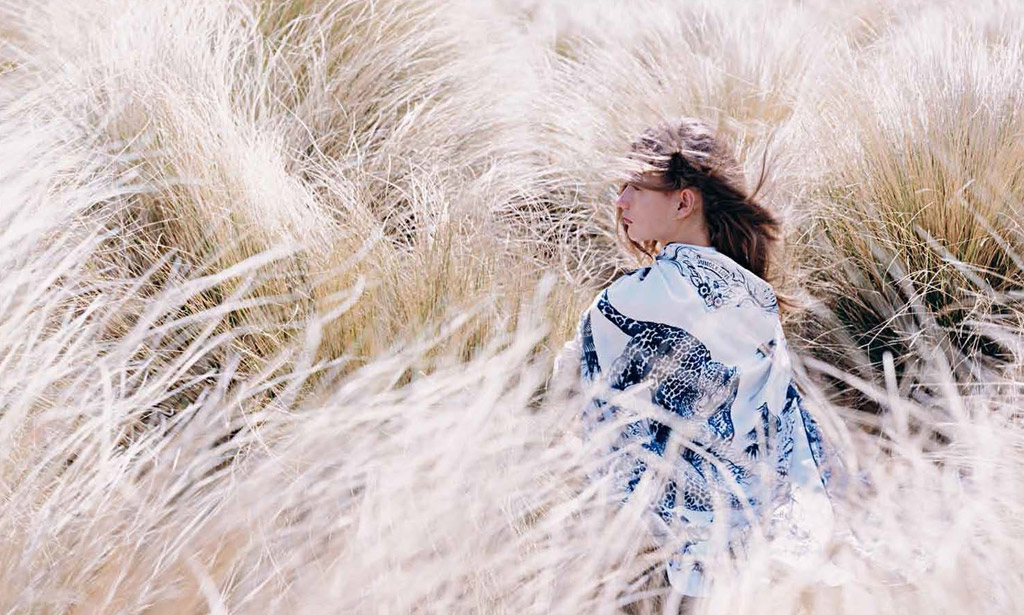 After the warm Florida light with photographer Harry Gruyart (Magnum) in 2015, the new campaign for Hermès Printemps/Summer 2016 is extending into the virgin wilderness of Australia with Japanese photographer Yoshihiko Ueda.  It’s a “grandeur nature” call (the year’s theme) secretly shot in Kosciusko National Park Australia that Victoria Marenzi, art director of communication at Hermès and artist Yoshihiko Ueda, interprets for us.

L’Oeil de la Photographie : Victoria Marenzi, Beyond that of the urban loafer, placed in nature and wild grasses, what is the inherent driving force of this new voyage?

Victoria Marenzi : In the year 2016 Hermès is celebrating Nature at full gallop.  This annual theme chosen by our artistic director, Pierre-Alexis Dumas, is a way of shining a new light on Hermès each year both internally and externally and is reflected in the creations of the house and in our events and advertising campaign. In seeking the translation of the French byline for the campaign ‘grandeur nature’, proposed by artistic director at Publicis EtNous Pacha Bensimmon,  it seemed obvious to me use Hermès by Nature for the English equivalent.  The theme is a wonderful opportunity to celebrate Hermès’ longstanding and profound relationship with nature.  Most obviously in the link we have to the horse since the first day we opened our doors, but as importantly as a source of inspiration and materials. We use the treasures that nature offers to us, but we do it in a balanced, ethical way, respecting flora and fauna alike. It’s a virtuous circle – if we wish to continue making beautiful objects with natural materials, we must protect and respect nature’s treasures.

ODLP : How was the choice of Yoshihiko Ueda as the photographer made?

VM : Yoshihiko Ueda is a photographer whom the house and our artistic director, Pierre-Alexis Dumas have long admired.  The Hermès photograph collection includes his works and we mounted an exhibition of such at our Forum space in Ginza.

ODLP :Why is his style a reflection of values and hard-wired into the DNA of Hermès?

VM : His approach to photography and most particularly his nature photography seemed perfect for this theme as it is at once utterly simple and yet renders nature both mysterious and magnificent. On the other hand, there is no ostentation or hyperbole but an extraordinary respect and tenderness in the capturing of each image.  In addition the campaign was shot on a box camera, so was intensely artisanal which of course was perfectly aligned with our creative values.

ODLP : Yoshihiko Ueda, what is it about this proposal that attracted you ?

Yoshihiko Ueda : I’d always had enormous respect for Hermès’ elegance and quality, and its tradition nurtured by innovation, so it was not just a great surprise, but a thrill for my photos to play a part in an episode of that history.

ODLP : How did you wish to reply ?

YU : I just told them honestly what I thought, as expressed in previous question.

ODLP : Is the use of a large format camera, which conveys this mysterious atmosphere and gives grain to the images, one of your trademarks ?

YU : Personally I don’t think of it like that, but if those who see my photos feel that way, then I suppose it is my way of thinking, my ideas about nature and so on that do it.

ODLP : You emphasise the postures, the details, and the sensations of wind and air using iconic Hermès objects, which appear as vessels of a story to be written; would you say that this introspective dimension reaches the invisible and the intangible, present within every one of us ?

YU : I like to think I always respond faithfully to what I personally find beautiful, what is going on inside me, Invariably I see photos as holding a mirror up to myself. My own thoughts, ideas, ambitions, feelings of all sorts become part of the picture. Everything I experienced in that moment is conveyed directly to the viewer. Hermès’ iconic objects moved me in so many ways: I was merely guided by them. Thus I think those who see the photos will follow the path I followed, and intuit from the photos the sensations I felt. So if they sensed from my photos the kind of sensations in your question, I can only say that those were what I too sensed from the Hermès objects.

ODLP : Victoria Marenzi and Yoshihiko Ueda, how did you approach scouting the location and the shooting for the project ?

VM : As usual our advertising agency Publicis EtNous was responsible for the overall artistic proposal and of course  and of finding  the location.  But this is always a team effort and both Hermès and the photographer were fully involved.

YU : We started off with the copy HERMES GRANDEUR NATURE, and Art Director Fabien Mouillard proposed a field of long grass as the best setting to express the spirit of that copy,an idea which also greatly appealed to me. We then started scouting locations, and traveled to the site with Fabien in advance. Initially—and this is something that happens a lot—we did not find that beautiful field of long grass like we were expecting from the advance material, and panicked a little. After scouting for a few more days , we asked the local coordinator to take us to his favorite spot. He told us, reluctantly it seemed, that there was indeed a place, not far from where we were. It was not on the list of locations since the setting did not correspond to the criteria  in the advance scouting. But I think it kept bugging him, and our question prompted him to show it to us again. We immediately headed there. On arrival, Fabien and I exclaimed excitedly that this was the place we’d been looking for. The long grass was rustling in the wind, like the mane of a horse galloping across the plains. Casting my eye over the scene, I was convinced that when it came to expressing the concept of the campaign, we couldn’t have found a better place. The shoot began, and I threw myself into photographing those beautiful Hermès objects amid this sea of grass with a life of its own.

ODLP : What message(s) did you wish to highlight and do you think you have achieved this ? What role can the viewer play in front of such images ?

VM : I think these images will stand out from the normal run of fashion advertising as they demand a pause,  a moment of silent appreciation in a world of noise and constant bustle. Nature is all enveloping, beneficial, a natural environment for the Hermès man, woman and object.  There is a glorious sense of presummer light and everything is part of the environment.

YU : I wanted people to summon up the sense of freedom that comes with being in the gentle embrace of nature, just as the campaign copy said .

That feeling of lying sprawled in a field of grass in the middle of nowhere, that everyone has experienced, or would like to experience, with nothing in sight but the grass, waving pleasantly in the breeze, blue sky, white clouds. Close your eyes and there is the sound of your breathing, deep and relaxed, and of the grass moving in the wind, and the lovely fresh aroma of grass: that’s the image I wanted the campaign to conjure up.

Paris : The Saut Hermès at the Grand Palais

Métamorphose by Sarah Moon published by Actes Sud and Hermès

Delpire & Co. : The Gallery at Hermès