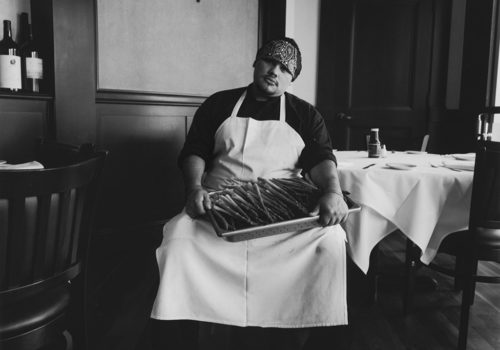 I have wonderful memories about Jean-Jacques Dicker. Between 1975 and 1980, I would see him once a year at Photo magazine. He lived in Hawaii, he was extremely charming, and every year he’d go off to East Africa in search of brothels. He took very sensuous pictures. Five visits, five publications: eroticism at Photo was very cutting edge. Then, there followed a thirty-five-year-long silence, and now an exhibition at the Auer Photo Foundation.
Jean-Jacques Naudet

Like many artists, Jean-Jacques Dicker has a day job to pay his bills. In his case, he works as a waiter. He has been a very successful one for some forty years thanks to his natural talent as a performer and his linguistic skills: he speaks six languages, including Japanese—very important at Wolfgang’s Steakhouse where three-quarters of the customers are Japanese. Plus, his French accent spoken in his lyrical bass baritone, transforms every menu into imaginative culinary poetry.

But Jean-Jacques is above all a photographer. Over the five years he spent at Wolfgang’s, he saw some hundred employees come and go: waiters, barmen, dishwashers, cooks, hostesses, and managers. There are over fifty people employed full time, and Jean-Jacques has embarked on an August Sanders sort of project: portraying Wolfgang’s Steakhouse.

Armed with his Plaubel Makina W67 and a tripod he keeps at the restaurant, he uses ambient light to capture the beautiful soft tones which bring out the antique décor of the restaurant. He chooses the spot and lets his models pose as they will. He only asks them to be comfortable and hold still to allow the light to gently settle on the negative—yes, Jean-Jacques is loyal to film and the darkroom. Thanks to this project, Jean-Jacques has discovered how much people love being photographed. He’s also discovered how much the clothes awaken the man: Darren and Mitch, who both wear many hats, waiting tables and working as managers, express different personalities depending on which hat they’re wearing, so to speak. His models often want to hire him to photograph their families, but his answer is always negative. Jean-Jacques follows his vision and always refuses to submit to the vision of others. In exchange for posing, the models receive a beautiful portrait of themselves—a silver gelatin print. What could be more wonderful?

To date, he has created seventy-six portraits, and the project is ongoing.