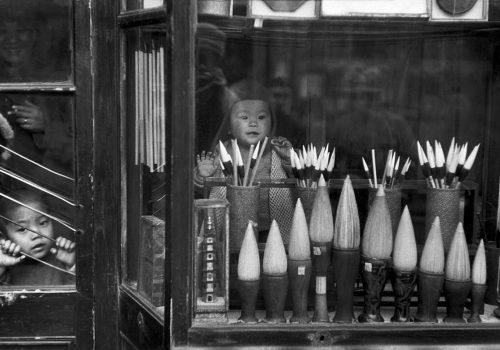 On November 25, 1948, Henri Cartier-Bresson receives an assignment from Life magazine to report on the “last days of Beijing” before the arrival of the Maoists troops. He went there for two weeks, and remained ten months, mainly around Shanghai, attending the fall of the town of Nanjing held by the Kuomintang, then forced to stay in Shanghai under communist control for 4 months, and leaving China a few days before the proclamation of the People’s Republic of China, October 1, 1949.

Over the months, his testimony of “traditional” lifestyles and the establishment of a new order (Beijing, Hangchow, Nanjing, Shanghai), produced in full freedom of action, met with a lot of success in Life and the best international news magazines (including Paris Match, which had just been created).

The long stay in China proves to be a founding moment in the history of photojournalism: this in depth reportage came at the beginning of  Magnum Photos , which Henri Cartier-Bresson co-founded eighteen months earlier in New York, and brings a new style, less eventful, more poetic and distanced, attentive to people as well as to the balance of the image. A lot of these photos are still among the most famous of the photographer (such as the “Gold Rush in Shanghai”). As a repercussion of “China 1948-1949”, Henri Cartier-Bresson became in 1950 a major reference for “new” photojournalism and photographic renewal in general. The books Images à la sauvette (Verve, 1952) and From One China to Another (Delpire, 1954), prefaced by Jean-Paul Sartre, confirm this supremacy.

In 1958, at the approach of the tenth anniversary, Henri Cartier-Bresson set off again on an adventure under opposite conditions: forced to be accompanied by a guide during  4-months, he traveled thousands of kilometers for the launch of the “Great Leap Forward” to report on the results of the Revolution and the forced industrialisation of the countryside. However, he succeeded in showing also the least positive aspects, the exploitation of human labor, the hold of the militia, etc. Here again, the report found an international success.

The exhibition at the HCB Foundation brings together 114 original prints from 1948-1949, 40 prints from 1958, and numerous archival documents.

The presentation of the exhibition is supported by Gutenberg Agency.

The exhibition is accompanied by the book