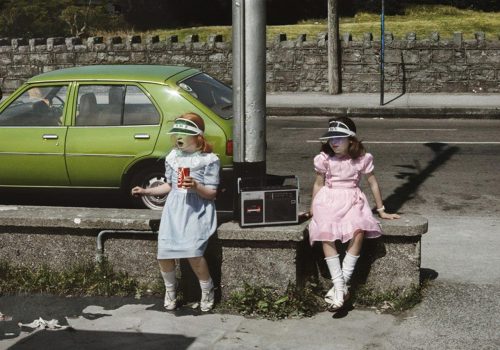 The first U.S. solo exhibition of Paris-based photographer Harry Gruyaert (Belgian, b. 1941) is on view January 23 through March 14, 2020, at Howard Greenberg Gallery. Well known in Europe for his street photography, his work is admired for its extraordinary use of color much like his American contemporaries Joel Meyerowitz, Saul Leiter, Stephen Shore, and William Eggleston. Gruyaert has been a member of Magnum Photos since 1982. An opening reception with the artist will be held on Thursday, January 23 from 6 to 8 p.m.

The 2018 documentary Harry Gruyaert Photographer illustrates how Gruyaert’s life was saved by color. Born to the repressed and grey background of a traditional Catholic Flemish family, Gruyaert later discovered the lights and color of Europe. Driven by the irresistible desire to be a photographer, he became a pioneer in European color photography. Gruyaert says “For me, photography is not only about composition and color, it has to say something about the time and the place.”

With an eye for idiosyncratic juxtapositions, Gruyaert has traveled the world finding bewildering beauty, complex constructions, and touching solitude. The exhibition covers his work in France, Spain, Belgium, Morocco, Japan, India, Russia and the U.S. Spanning four decades from 1981 through 2017, his photographs range from street scenes to seascapes, all punctuated with his unique, saturated approach to color. Often a lone figure can be found in his photographs, at times faceless or viewed from behind, evoking a loneliness of modern life or simply the serene banality of the quotidian.

“I am interested in that strange magic that occurs when things come together. I look to form a connection to a place. I have to be moved by something,” said Gruyaert recently from his studio in Paris.

In an introduction to his recent book, Edges (Thames and Hudson, 2019), the American artist Richard Nonas notes, “He photographs the boundaries that hover just beyond our sight…the shadows of an actual reality too blurred, too confused, too nuanced for any language to hold. He captures it whole. He holds it. As powerful art. As heart wrenching beauty. As the overwhelming mystery of ungrammatical silence.” A forthcoming book, Harry Gruyaert: Last Call, will be published in the U.S. in April 2020 by Thames & Hudson.

Born in Antwerp, Belgium, in 1941, Harry Gruyaert studied at the School of Film and Photography in Brussels from 1959 to 1962. He moved to Paris to pursue a career in photography, while also working as a freelance director of photography for Flemish television between 1963 and 1967. In 1969, he made the first of many trips to Morocco, which led to a Kodak Prize for his Moroccan work in 1976. From 1970 to 1972, he lived in London. By the end of the 1970s, Gruyaert had made significant bodies of work in North Africa, the Middle East, the U. S., Europe and India, where he refused stereotypical exoticism in favor of a deeper aesthetic. Around the same period he also photographed his homeland Belgium. In 1982, he joined Magnum Photos. A number of solo exhibitions of his photographs have been held in Europe recently including the Fondation d’Entreprise Hermes, Paris, and the FOMU, Antwerp.  He continues to travel the world, most recently to Japan in 2019.

Since its inception nearly 40 years ago, Howard Greenberg Gallery has built a vast and ever-changing collection of some of the most important photographs in the medium. The Gallery’s collection acts as a living history of photography, offering genres and styles from Pictorialism to Modernism, in addition to contemporary photography and images conceived for industry, advertising, and fashion.