Harry Gruyaert, It’s not about cars 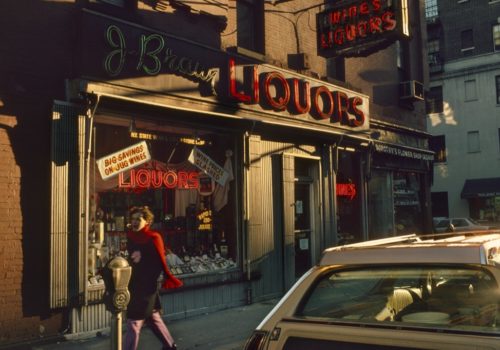 Harry and I have known each other for a long time. It is a warm relationship based on friendship and deep respect for the work which is essential to me – in all my lasting collaborations. It turned out that I only got to know Harry’s work thoroughly once we decided to work together. Of course, Harry being called the pioneer of European color photography put that mark on him that somewhat closed him in or reduced the richness of his oeuvre to me and many others – even if it points out an essential facet of his research. But over time, I discovered the many different aspects of his photography and it made even more sense for us to work together.

This exhibition, and in extension, this publication, is … not about cars; the automobiles are just a pretext to make a selection from that rich archive treating form, color and light. Interesting in the choice that’s been made for this selection is a focus on Harry’s talent to depict the geography of where his photographs were taken, purely and mainly through the rendering of the colors. I mean it’s not what is depicted in the images that points out to us if they were taken in Moscow or Marrakech. It’s all in the caught light, in the specific feeling of capturing precise colors. It’s also thrilling to recognize his passion for movies, giving him this peculiar regard that is not documentary, nor storytelling. And if some images may lean in that direction, it is truly despite himself. In Harry’s work, it’s never about cars, as it’s never about a specific place, as it’s never about a sadness or an oddness, but for sure it’s about a truly sensitive and intelligent look at the world. A world of things, people, and yes, places, cars, atmospheres… life.

Roger Szmulewicz is the director of Gallery 51, in Antwerpen, Belgium.