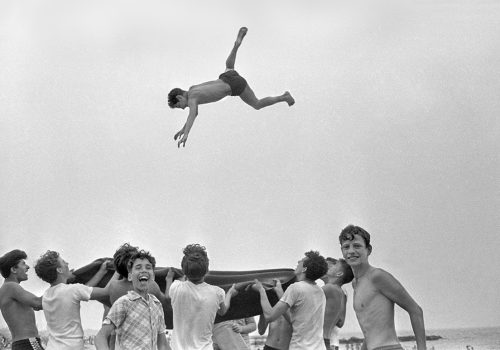 LAST STOP CONEY ISLAND: The Life & Photography of Harold Feinstein is an independent feature documentary about the extraordinary life and work of American photographer Harold Feinstein (April 17, 1931 – June 20, 2015). It was shot by Andy Dunn and released in 2019. The documentary has been projected and acclaimed in various festival and venues ever since, like DOC NYC (2018), the Royal Photographic Society (2019) and Sundance (2020).

A master of black and white street photography, Feinstein’s career spanned over six decades from the late 1940s until the end of his life in 2015. However, after early prominence in the nascent New York photography scene, including having work acquired by Edward Steichen for MoMA at the age of 19, Feinstein turned away from the limelight and was all but forgotten… until now.

A true artist with a unique and inspiring philosophy on life, Harold finally began to receive the recognition he deserved toward the end of his life. That is where the film finds him before re-tracing his story through the lens of his diverse body of work, much of which has never before been seen.

In his 2015 obituary The New York Times declared him “one of the most accomplished recorders of the American experience.” Throughout the 50s he was frequently exhibiting with contemporaries such as Garry Winogrand and Saul Leiter and collaborating on projects with his close friend W. Eugene Smith. Gallerist Howard Greenberg says Feinstein “occupies high ground in the pantheon of street photography.”

But the course of Feinstein’s life would be forever altered by pivotal circumstances that led him away from the ascendant photography scene in New York, and toward a wholly different way of living, thinking and defining himself creatively.

The rediscovery of Feinstein’s vast and diverse body of work came in his final years and the film meets him then; in his early eighties and with a zen-like appreciation for the life he lived. Through the testimonials of friends, lovers, family members and photography experts, this atmospheric film paints an intimate yet honest portrait of this complex and inspirational underdog of 20th century photography.