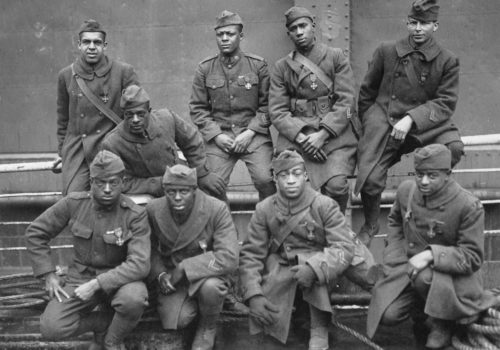 Victims of segregation in the U.S. Army, 4,500 black American soldiers fought in World War I wearing French colors. As the journalist Gaétan Mathieu reports inFrance-Amérique, in 1917, President Woodrow Wilson announced that all American men, regardless of race, must participate in combat in Europe. The war would allow the black population to prove its patriotism and courage to the white elite, and contribute to their fight for civil rights on American soil. Of the 2.3 million black Americans in the military, nearly 200,000 crossed the Atlantic. Few of them saw combat, with the majority limited to the Services of Supply. The first black combat unit was the 369th infantry regiment based in New York. These soldiers bore arms not for America but for France, since the United States refused at the time to let black soldiers fight alongside white ones in the trenches. France, in desperate need of troops, persuaded the American government to let them draft some of theirs, including the now-legendary Harlem Hellfighters. Fifteen hundred died in battle in France, while five hundred received the French Croix de Guerre and three thousand returned safely home. Today their story remains unknown, with some history books ignoring their existence entirely.

In these photographs, we see the soldiers carrying bayonets in French trenches, preparing for battle. Compare these men in their Adrian helmets with the white officer, and with the usual photographs we see of the Great War. Next we see them all smiles on the boat home, then surrounded by friends and family, then marching in parades to mark the armistice, including one in New York in February 1919, where they carry (for a change) the American flag in front of the Flatiron Building and display their war wounds, like this one soldier shaking hands with the crowd on 5th Avenue in Manhattan. One of the most striking images is this wide shot of a street in French city of Aix-Les-Bains, which shows its citizens surrounding the Harlem Hellfighter’s jazz group as it plays encouragement to the fighters headed to the front.

For the centenary of the First World War, the French consulate in New York recently paid tribute to the Harlem Hellfighters and other black soldiers who served in French uniform. These photographs show black Americans fighting for their country before their fight for civil rights.