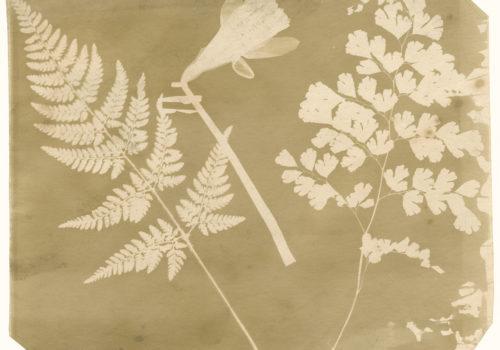 Anna Atkins (1799-1871) is one of the earliest of women photographers. On display is her “Gleichenia flabellata (Australia),” circa 1851-1854, which shows a fanlike, forked frond of this large Australasian fern. Atkins’s cyanotype photograms of the 1850s are distinctive precursors of the expressive photography of twentieth century and contemporary artists.

Also featured is an albumen print of “Hypatia,” Julia Margaret Cameron’s (1815-1879) portrait of Marie Spartali. Spartali presents a very different appearance from many of Cameron’s other milkmaids and daughters of friends, perhaps because she herself was an artists’ model and an accomplished watercolorist. Marie Euphrosyne Spartali was the daughter of the Greek consul in London. A pupil of the Pre-Raphaelite painter Ford Madox Brown, she first exhibited at the Dudley Gallery and in 1867, about the time of this photograph, she was admitted into the Royal Academy. Before posing for Cameron, she had modeled for Dante Gabriel Rossetti, Ford Madox Brown and for Edward Burne-Jones.

The extent to which artistically inclined Victorian women engaged in gathering specimens from nature has yet to be fully appreciated. One such practitioner was Mary Wyatt (1789-1871). Based on William Hooker’s British Flora of 1830, Algæ Danmonienses was compiled by Mary Wyatt, a former servant of the algae collector Amelia Griffiths. The high price of the book upon its publication in five volumes between 1834 and 1840, and its scarcity today speak to the limitations of working with seaweed specimens and the challenges of preserving them. On display is a rare complete copy in fine condition.

Remarkably, William Harvey wrote that he intended his 1841 Manual of the British Algæ to be a companion volume to Wyatt’s work and suggested to his readers that they acquire her book in lieu of illustrations.

A selection of platinum prints by Doris Ulmann (1882-1934) documenting the lifestyle and traditions of the Gullah community of South Carolina, a community known for the preservation of their African linguistic and cultural heritage, formerly in the collection of her assistant and collaborator John Jacob Niles (1892-1980), are also on display. Ulmann mastered her photographic and printing techniques while studying with Clarence White at his school of photography from 1913-1917.

Hans P. Kraus Jr. Fine Photographs, established in New York in 1984, is a dealer in 19th and early 20th century photographs. The gallery participates in Paris Photo and The Photography Show presented by AIPAD and publishes monographs and catalogues on early photographers under the series title Sun Pictures.