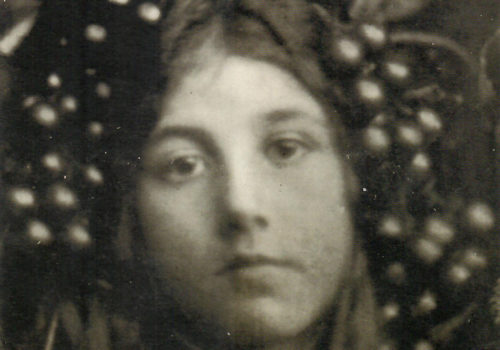 Facing the Camera II is on view at Hans P. Kraus Jr. Fine Photographs. The exhibition presents a selection of chiefly nineteenth-century portraits by Julia Margaret Cameron, J. B. Greene, Hill & Adamson, Oscar Gustave Rejlander, and William Henry Fox Talbot, among others, along with a contemporary work by Adam Fuss.

Born in Sweden, Oscar Gustave Rejlander (1813-1875) made his career in London. Initially a painter and a modeler with an interest in anatomy, he became a highly regarded yet controversial photographer known for the complexity of his photographic compositions. Captivated by both the paper photographs of sculpture he saw while studying art in Rome in 1852 and with the capabilities of the photographic medium, Rejlander returned to London the next year where Nicolaas Henneman taught him the rudiments of photography.

Julia Margaret Cameron (1815-1879) sought to record the qualities of innocence, wisdom, piety, or passion ascribed to great biblical, historical, and legendary figures through the faces of her family and friends. Cameron used a long exposure and shallow depth of field to give that slight sense of animation that merges the young girl, Kate Keown, with the mythic character Circe, seemingly bringing her into the viewer’s presence in this fine print. In Greek mythology, Circe is a goddess of magic, the daughter of the sun god Helios and the Oceanid nymph Perse. Renowned for her encyclopedic knowledge of potions and herbs, Circe is exiled to the solitary island of Aeaea by her father Helios for killing her husband. She lures sailors, and the Odysseus’ crew, to the island and transforms them into swine.

During the Crimean War, the mismanagement and suffering of the common troops was terrible beyond belief. In spite of the emergence of Florence Nightingale and other improvements, Britain knew it had failed its soldiers, and it was only upon their return in 1856 that the “Crimean Heroes” and “Crimean Braves” began to gain the recognition they deserved. Queen Victoria commissioned Cundall & Howlett (1818-1895 & 1830-1858) to make candid portraits of the common soldier.

Howlett chose to work in the field, setting up temporary studios at the dockyards and hospitals; Cundall worked from their studio in central London. The lighting is clear, the focus sharp and Cundall’s vision is so direct as to avoid any sentimentality. This image was one of four exhibited in the 1857 Photographic Society of London’s annual exhibition. Incorrectly credited to Roger Fenton in the 1857 exhibition, Cundall’s image is rendered in an experimental process, a “proof” print using the photogalvanograph, devised by Paul Pretsch (1808-1873), Austrian photographer, inventor and former Manager of the Imperial Printing Establishment in Vienna. Starting in late 1856, they (Cundall and Roger Fenton, an investor and partner) published at their Patent Photo- Galvanographic Company in the Holloway Road, Islington, London, a serial portfolio, Photographic Art Treasures, or Nature and Art Illustrated by Art and Nature, illustrated with photogalvanographs derived from several photographer’s works. After a short production run the company folded. This photomechanical proof is displayed alongside a salt print variant.

Bertha Wehnert-Beckmann (1815-1901) was introduced to photography by her husband, the Leipzig daguerreotypist Eduard Wehnert who died in 1847. Bertha then emigrated in 1849 to New York City with her brother where she opened two studios. It was about this time she began making photographs on paper in addition to daguerreotypes. Upon receiving the American Institute in New York’s award for services to portrait photography, Wehnert-Beckmann returned to Germany in 1851 after handing over her NY studios to her brother. In Leipzig, she photographed those prominent in the arts, including composer Johannes Brahms and pianist/composer Clara Schumann. Her work was represented at the first major photographic exhibition in Germany, the General German Industrial Exhibition held in Munich in 1854. Bertha’s innovative portraits, her use of modern advertising methods and her sound business sense won her great acclaim.

About “My Ghost” Adam Fuss (b. 1961) writes, “My Ghost is a series of photographs begun in 1994. They represent a personal expression of loss and an attempt to express in visual terms an emotional presence of a human that is now absent.” These are technically masterful accomplishments using the cameraless photogram process. This is the first baptismal dress of several in the series.