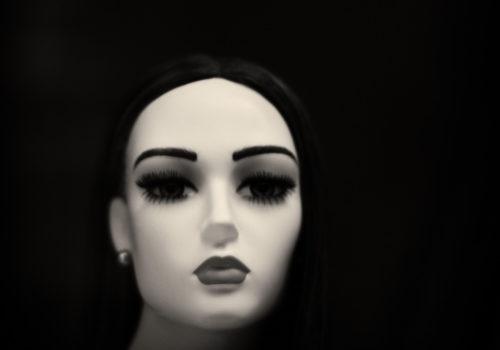 The mannequin in its modern form appeared on the high streets of London, Paris and New York in the 1870s and quickly became an essential part of any window display.

In the beginning they were modeled on aristocrats, movie stars, musicians and models, today they embody an ideal of beauty above all. They are a ubiquitous feature of every high street and mall in the developed world.

Nowadays mannequins can be considered as a new public art having replaced the goddess sculptures in the name of commerce. In a culture where money is king, the greatest art and aesthetics are those that can be bought. And so the mannequin must convey our ideals and fantasies while making them accessible by buying everything that covers them.

That’s why mannequins should convey a certain kind of elegance. Elegance, a synonym for beauty that has come to acquire the additional connotations of unusual effectiveness and simplicity. It is frequently used as a standard of tastefulness particularly in the areas of visual design, decoration. Elegant things exhibit refined grace and dignified property.

The mannequins shown here are portrayals like portraits of living persons. All images were taken from outside through the glass of the window pane with all influences and limitations the photographer faces in this situation.

Dependent on the situation (light, angle of view, surrounding) there are many diverse realizations, there are color photos, there are monochrome images, but the main thing in focus is always the face.

The human face is surprisingly full of expression and most people are able to scan it in order to differentiate the smallest changes in mimics of others. The recognition of human faces and mimics is so important that an entire area in our brain is devoted solely to this task. So it is not too surprising that the portrayal of the human face also takes up a great role in art.

Even the designers of the mannequins have taken this into account. That’s why some mannequins look like human beings made of flesh and blood.

“The most entertaining surface on earth is that of the human face.” – Georg Christoph Lichtenberg, German physicist and satirist, master of aphorism (1 July 1742 – 24 February 1799)