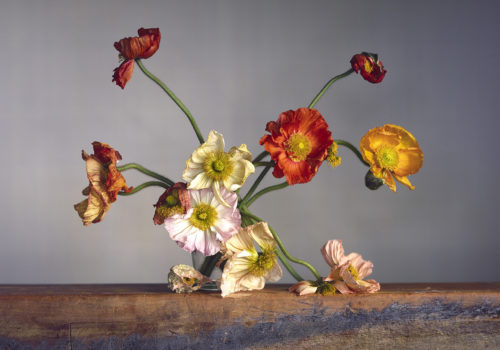 Hamiltons Gallery’s association with Irving Penn and later his Foundation spanned three decades; and for the first time, the gallery unites the work of Penn who was one of the most renowned photographers of his time – alongside that of contemporary, British photographer Richard Learoyd. Together, their studies of flowers present us with an exceptional vision of forms, tones, and patterns, entwining the beauty of nature with their photographic genius.

Learoyd’s oeuvre gives a contemporary interpretation, whilst remaining deeply rooted in the past; both his black-and-white photographs and his works in colour are the result of a traditional process. He strips photography down to its essentials, following a historical photographic process invented centuries ago. His direct-positive colour prints are produced using a custom-built, in-studio camera obscura, composed of two dark chambers and a fixed lens which exposes light directly onto photo-sensitive Ilfochrome paper. Because the prints are not enlarged from negatives, the resulting images are grainless and exceptionally detailed.

His flower still lives seem to float on hazy backgrounds creating an immateriality and timelessness in the composition. Learoyd captures the peak of beauty before the inevitable decay sets in, giving the flowers an immortal character. This is not only a reference to the beauty of flora but also to its fragility, which can perhaps be applied to the finite nature of our world.

“For me my pictures of flowers are an exercise in balance. An arrangement of mass and colour in space. A compositional conundrum of how wrong a picture can be before it tips over the edge of stupidity. Flowers only last a day or two once they are uprooted. These pictures explore the beauty in aging and decay. They measure the old and the fresh. When I look at them, I measure their success simply on how they feel, how they communicate the fragile nature of life and the inevitability of an end.” – Richard Learoyd, 2022

Irving Penn started to photograph flowers as a series in 1967 with a commission by American Vogue to illustrate their Christmas edition with photographs – almost portraits – of tulips. This became the first of seven issues of the fashion magazine he would illustrate with different genera of flowers. The photographs were collectively published as a book, ‘Flowers’, published in his 1980 monograph Flowers; he later revisited the motif in the 1990s and early 2000s, using flowers as a metaphor for his older age and the beauty which can be found in the expiring bloom.The Penn prints featured in this exhibition are mostly dye transfer, an exceptionally technical printing process that heightens these spectacular works.

In total, Mr. Penn produced 42 editions of flowers in his lifetime. Prints from each of these editions were exhibited for the first and so far only time in 2015 at Hamiltons Gallery, at which point Hamiltons published a catalogue raisonné of the series. David Campany, who wrote the essay for this publication, writes of these pictures: “Each flower was entirely individual, and when two or more appeared in the same photograph they only served to heighten one another’s particulars. Penn was not looking for examples that were representative of their species, nor compiling a botanical guidebook or taxonomy. Each photograph is a unique encounter with a unique thing in all its unsettling wonder.”

Hamiltons’ exhibition combines these exceptional works from both artists’ careers, celebrating not only technical mastery but also the splendour of nature. The flower ‘portraits’ are intensely beautiful and likewise surprising, rife with unusual angles and unexpected focal points, providing the viewer a rare vision of the patterns, colours and forms of these flora.

Richard Learoyd was born in Nelson, Lancashire in 1966. He studied Fine Art Photography at the Glasgow School of Art, where he was a student of Professor Thomas Joshua Cooper. He taught photography at Bournemouth and Poole college of Art and Design from 1994 to 1997 and worked as a commercial photographer in London until 2002. Learoyd’s photographic work, characterised by the use of a room-sized camera obscura, was first exhibited in London in 2007. In 2015, Aperture released Richard Learoyd: Day for Night, a comprehensive book of colour portraits and studio work, and concurrently, The Victoria & Albert Museum in London mounted his first solo museum exhibition, Dark Mirror. Learoyd’s work is included in the collections of The Getty, Tate, Centre Pompidou, The Metropolitan Museum of Art, The Museum of Modern Art, San Francisco Museum of Modern Art, Nelson-Atkins Museum, National Gallery of Canada, and Yale University Art Gallery, among others.

Irving Penn (1917-2009) was born in Plainfield, New Jersey. From 1934 to 1938, he studied design with Alexey Brodovitch at the Philadelphia Museum School of Industrial Art. Following a year spent painting in Mexico, he returned to New York City and began working at Vogue, where Alexander Liberman was art director. In a career that spanned seven decades, Penn became one of the most renowned photographers of his time, mastering a variety of genres, including fashion photography, portraiture and still life. Mr. Penn’s influence in photography continues today. He has had over 40 major museum exhibitions in his lifetime including shows at the Museum of Modern Art, New York, The National Gallery of Art, Washington, D.C. and The J. Paul Getty Museum. To commemorate his 100th birth year in 2017, the Metropolitan Museum of Art, New York organised Irving Penn: Centennial, a retrospective that travelled worldwide.