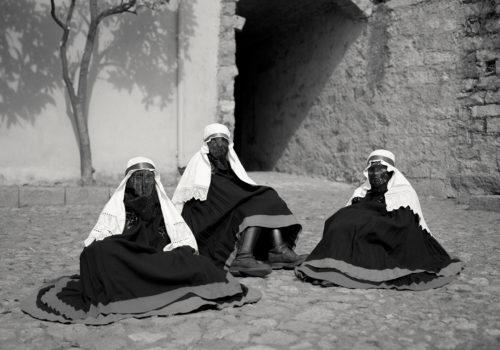 Gli Isolani (The Islanders) is the latest project by British photographer Alys Tomlinson.

Tomlinson has spent the last two years exploring the lives of islanders in modern-day Italy, capturing little- known rituals and traditions inspired by paganism, fables and folklore. These almost theatrical images document traditional costumes and masks, preserved and handed down for generations, worn during festivities and celebrations in Sicily, Sardinia and islands of the Venetian lagoon. The project provides a meditation on place, faith and identity.

Her portrait photography is often characterised by the intensity in the gaze of her protagonists and the notion that every individual has an untold story, as seen in her previous bodies of work Lost Summer and Ex-Voto. The immediacy and timelessness of Tomlinson’s black and white photographs in Gli Isolani provide a connection between people and place, evoking curiosity in the viewer which prompts questions rather than providing answers.

Tomlinson’s ongoing interest in anthropology and ethnography finds its perfect outlet in Gli Isolani where she reveals a mysterious and otherworldly existence in which past and present merge and cultural traditions converge.

In this series, Tomlinson continues to work on analogue film with a large format plate camera. The almost mythical images, set against wild and rugged landscapes, blur the boundaries between fiction and reality, artifice and nature and provide a rich visual language that reflects the complex history these lands have experienced.

The book Gli Isolani will be published by GOST Books to coincide with the HackelBury exhibition in the autumn 2022. Essay by writer Sabrina Mandanici.

Alys Tomlinson was born in 1975 and grew up in Brighton, UK. After a degree in English Literature, she went on to study photography at Central Saint Martins and recently completed an MA (Distinction) in Anthropology at SOAS, University of London.

Her major body of work Ex-Voto (2016-2018) explored Christian pilgrimage sites in Europe. The works encompass formal portraiture, large format landscape and small, detailed still-life shots of the ex-voto objects and markers left behind. Ex-Voto was published as a book by GOST in Spring 2019.

She is currently working on Mother Vera, a feature length documentary film supported by Sundance Institute, which focuses on one of the pilgrims whom she met in Grabarka, Poland and photographed for Ex-Voto, exploring Vera’s life at a convent in Belarus.
Her series Lost Summer (2020) documented teenagers in north London who had their proms cancelled due to the Covid 19 pandemic.
Alys lives and works in London.