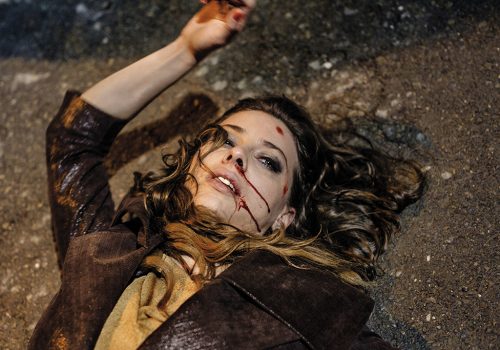 The pictures in Guy Martin’s new book The Parallel State are both documentary and pictures taken on the sets of films and television shows. Combining images that are polar opposites – one of fact the other fiction – acts to create a complex narrative around the rise of fascism globally, and in particular the political climate in Turkey, where Martin lived for several years.

Martin, a British documentary photographer, explains that the phrase ‘parallel state’  “has become a byword for power grabs, populist rhetoric, and a police state on the hunt for an unfixed yet ever-present enemy…With factious political movements on the rise from the United States to the United Kingdom and beyond, the work has taken on a particular potency in its focus on Turkey as a model…(where) the deliberate shattering of citizens’ sense of security, community, and ability to distinguish between fact and fiction ensures only one state-approved narrative prevails.”

It is an interesting concept to use images, many of which are difficult to define, in terms of what’s real and what’s fiction, as a premise for a story about the problems that face us in an era where truth in journalism, including photography, is being questioned at the highest levels of government. And at a time when the public in the United States in particular is losing trust in the media.

In the book Martin quotes Timothy Snyder, author of On Tyranny who claims “Fascism says nothing’s true…if we don’t have access to facts, we can’t trust each other. Without trust, there’s no law. Without law, there’s no democracy.” In the pages of The Parallel State fact and fiction sit side by side in a non-linear narrative, creating a disturbing, hyperreal portrayal of what’s being played out in political arenas around the world.

The divisive politics of US President Trump and the resurgence of the far-right in that country, what’s happening in Brazil with the election of far-right populist Jair Bolsonaro, the unrest in the UK and in other parts of the world, are possible because of attacks on truth. Martin makes a compelling argument that the absence of truth, or perhaps more to the point, the propagation of a particular view of reality, has also fuelled the authoritarian rule of Turkey’s President Erdoğan. What Martin’s pictures tell us literally, anecdotally and at times in metaphors where darkened windows and opaque curtains symbolise a lack of transparency, is how authoritarianism can creep “almost imperceptibly into the fabric of a society.” And establish itself in the guise of normality.

Martin wants us to ask questions of these pictures, to think critically about what we see, to consider what is truth, to look beyond the surface. It is an erudite visual conversation, one that requires an enquiring mind to understand what is being portrayed in this collection of pictures that talk of power, control, subterfuge and cultural chaos.

I find it fascinating that Martin, a seasoned conflict photographer, came to know Turkish society by photographing on the sets of soap operas and films. (Martin lived in Istanbul for a time after a near-death experience in Libya.) The cultural insights he’s drawn from being on set and behind the scenes, inform what is a very political narrative played out in visual tropes of pop culture. It is a brilliant treatment of a subject that is difficult to portray without deferring to what might be considered stereotypical photojournalistic imagery. While Martin does include documentary images of protests and violence, there is the underlying sense that these pictures could also be movie stills, a blurring of art and reality in an arena where truth becomes perception. There are no captions either which further enhances the dichotomy of truth and fiction.

From a design viewpoint, there are aspects of the book that I love, like the dust jacket that unfolds to become a movie poster from the 1970s or 80s. There are also five inserted sections that are smaller than the rest of the book, and are like mini zines, printed on glossy paper when the rest of the book is on a heavier semi-matte stock. One of these inserts features a transcript from the What’s App conversation between “a group of plotters from the failed Turkish coup.” In another are screenshots of heavily made up Turkish women in western dress, the “kittens” who appear on televangelist Adrian Oktar’s bizarre TV shows. There is a collection of movie posters too that feature raunchy images of naked women, men and women with guns, lovers in embrace, from films dating back forty years. The only negative comment I have about the design is that some faces are split by the fold of the book, which is detrimental to the image and impacts the narrative. I would prefer to see a smaller complete image, but that’s a personal preference.

This is a book that you need to be prepared to think about. Flicking through the images, while visually entertaining, will not allow a deeper reading. Make yourself a cup of tea, curl up in an armchair, read the essays at the back of the book and give yourself time to explore. You might need a couple of readings, but it will be worth it.