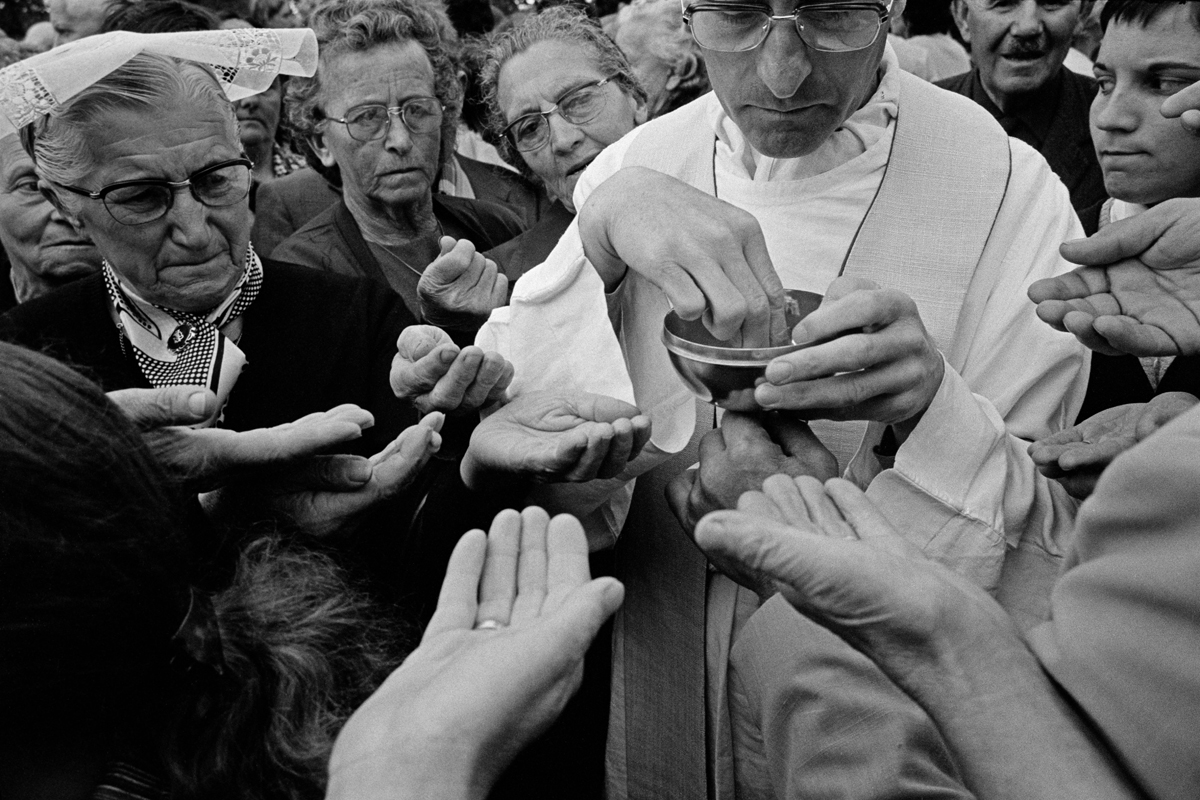 Magnum photographer Guy Le Querrec produced more than five thousand photos in Brittany between 1965 and 1980. This month, three exhibitions in Brest, Lannion, and Lorient and a book are paying tribute to this long-term work.

Guy Le Querrec, of Breton origins, was born in Paris on May 12, 1941. He took his first photos at the age of fourteen with an Ultra-Fex 4.5×6, a Christmas gift from the Workers’ Council at the bank where his mother worked. The following year, he bought a second-hand Photax, followed by a Semflex, then had a Rolleiflex, given to him by his parents in exchange for academic success. In 1962, he bought his first Leica, a IIIG, with the earnings from his extra hours at the insurance company where he worked. He became a professional photographer at twenty-six and started in a small advertising agency, “Atelier 3”, located on Rue Daguerre in Paris.

In 1969, he was employed by the weekly Jeune Afrique as a photojournalist and put in charge of the photo department. For two years, he frequently traveled to French-speaking Black Africa and to the countries of North Africa. Next, he joined the agency Vu from Éditions Rencontre, led by Pierre de Fenoÿl in 1971, and, the next year, co-founded the agency Viva, which he left in 1975. Subjects the most representative of that period include: Brittany, “Family in France” (collective reportage of Viva, 1973), Portugal during the Carnation Revolution (1974-1975), “The French on Vacation” (1976, first grant from the Foundation Nationale de la Photographie). Starting at Magnum in 1976, he was elected a fellow in 1977.

The main stories: the Concert Mayol in Paris (1979, grant from the city of Paris), many African countries between 1984 and 1998 with a report on the traditions of Lobi Country in Burkina Faso as part of Magnum’s 50th anniversary, China (1984-1988, 1989), the United States in 1990: Big Foot Memorial Ride (South Dakota). From 1977 to 1989, a close collaboration with sculptor Daniel Druet brought him to the Élysée Palace for a few of President François Mitterrand’s break sessions.

One of these photographs had been selected in 1999 for the series “The Photos of the Century: 100 Historic Moments” (TV and book). In 1998, he was the winner of Paris’s Grand Prix. Music, particularly jazz, which he frequented since the 1960s, held an important place in his work. His photographs established a dense, regular column on the world of musicians, their styles, their rhythms, their relationships, and their surroundings on stage, in concert, in rehearsal, behind the scenes, traveling, and awaiting creation and life. His first photo of Michel Portal was taken in 1964. In 1981, in connection with a project of the Ministry of Culture (Photoscopie), he followed him for three months. From then on, he regularly reported on the episodes of his life as a musician, notably in his booklets for the CDs “Minneapolis” (2001) and “Minneapolis We Insist” (2002) published by Universal Jazz.

During the Rencontres Internationales de la Photographie d’Arles, at the Théâtre Antique, he created two pieces, “De l’eau dans le jazz” [“Water in Jazz”] in 1983 and then in 1993 “Jazz comme une Image” [“Jazz as an Image”]. Projected on a giant screen, the photographs were designed as a score for live, improvised music by a quartet where he reunited Michel Portal, Louis Sclavis, Henri Texier, and Jean-Pierre Drouet. In 1998 over five weeks, he created, in Parisian metro stations, an evolutionary poster campaign (Jazz comme une Image) devoted to the Banlieues Blues festival.

From 1980, he participated in thirty or so documentary films on jazz, mainly directed by Frank Cassenti (musician profiles, festival reports…). The African tours were extended through twenty-five countries with the musicians Aldo Romano, Louis Sclavis, and Henri Texier, a trio created by his own initiative. Box sets (CDs and booklets, photographic stories of these voyages) were published by Label Bleu: in 1995 “Carnet de Routes” (Central and Western Africa), in 1999 “Suite Africaine” (Eastern and Southern Africa). In 2005, the third part of the African triptych was released as a double album CD “African Flashback”, including a selection of close to 200 photographs taken during other photographic assignments in Africa between 1968 and 1998 and put to music by the same trio. In November of 2006, for the 20th international DJ’azz de Nevers Festival, the trio and the Griot created the piece “Root africaine”. Raymond Depardon, Artistic Director of the Rencontres Internationales de la Photographie d’Arles 2006, picked him as one of his “traveling companions”.

Under the title “L’œil de l’éléphant” [“Eye of the Elephant”], he found himself in the middle of three projects: working on an important retrospective exhibition of seventy large-format photographs, creating his new projection piece of photographs put to live music by the same quartet from 1983 and 1993 (Portal, Sclavis, Texier, and Drouet), and directing a course. The two pieces “L’œil de l’éléphant” and “Root africaine” toured France, Belgium, the Netherlands, Hungary, Spain, Italy, Germany… In 2008, Daniel Soutif selected a portfolio for the exhibition “A Century of Jazz”, coproduced by the MART in Rovereto, the Quai Branly Museum in Paris, and the CCCB in Barcelona.

Guy Le Querrec also led, right after his first seminar at the Rencontres d’Arles in 1976, regular and noteworthy pedagogical activity in France (RIP d’Arles, University VIII, Paris Ateliers…) and abroad (Switzerland, England, Spain, Italy, Canada, Senegal, Mongolia…). Raymond Depardon writes: “He is a poet and a jester at the same time! I immediately though of him. Guy is a virtuoso. Without a doubt, he has a ‘Magnumian’ legacy, the decisive moment, and he also has a strong personality. He’s a great shooter. He triggers his camera at the right moment. He worked a lot on that. He gave us all a complex! He’s someone very present. He’s authentically French. He carries a world with him. Guy is a real Parigot [Parisian]! And he likes  words, he likes to smile… I had the chance to have a workshop with him. Guy is a great pedagogical expert! I helped him, but also observed. His knowledge is monumental. He has an incredible talk on how to make photographs. If I had to give someone advice, I would tell him to listen to Guy because he knows how to convey the love of photography, that science. He’s a little bit of a psychologist, wizard, counsellor. He likes people, the human being. He also likes music. It’s such a great pleasure for us. We also have this point in common, we’re both Africans! We had this utopian plan to meet in the middle of Africa, him coming from the west and me from the east. One day, perhaps, we’ll do that story. Africa suits him well. He’s perhaps the most African of the Magnum photographers. He’s the griot, the musician, gesture, grace, talk. He loves Africans, people, women, music, notes, songs. His character is very French, but, at the same time, universal. I won’t find very many Guy Le Querrecs in the world!”