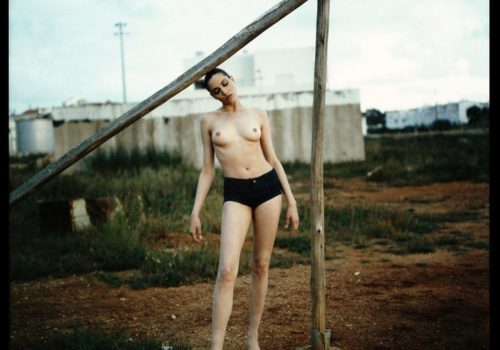 Until March 15th 2014, the Galleria del Cembalo in Rome hosts the exhibition Doppio gioco. Photographs by Giovanni Gastel and Toni Thorimbert, organized in collaboration with Peliti Associati. “Doppio gioco (Double game): an adjective and a noun. If you analyze each word separately they have a very precise meaning but  put together  the analysis becomes less certain, almost ambiguous. At a first glance, it suggests a wilful deception or, in a broad sense, a game played by two”, Giovanna Calvenzi, curator of the exhibition, says. As a matter of fact, The  key players of this exhibition are  Gastel and Thorimbert, two of the most known Italian fashion photographers.

The exhibition has been presented within the framework of the high fashion Roman shows, in the space dedicated to photography, opened in 2013 at Paola Stacchini Cavazza and Mario Peliti initiative, in the Palazzo Borghese in the center of Rome.

The exhibition, featuring 52 works by two leading interpreters of contemporary Italian photography, offers a dialogue made of cross references and souvenirs of the two photographers capable of mixing the fashion language with personal ideas and their researches in other fields of photography.

Gastel and Thorimbert have two different personalities, from their personal experiences and their way of conceiving photography. but they share accuracy, passion, mutual respect, friendship and belong to the same generation .

Together they created the underlying theme of the exhibition, hovering between  the sensations of a possible intentional deception and an  interesting game that needs a couple of players in order to create mutual feedback of meanings and visual references.

“Both solutions apply perfectly to the way Giovanni Gastel and Toni Thorimbert conceived the exhibition’s visual proposal. At a distance, they played a game of two, reflecting upon each other’s portfolio and photographic experiences carried out and nurtured during the years.

They secretly accomplished a double game by using the fashion’s world a creative exercises that  had  roots in other areas. Specifically they borrowed and blended languages and grammars and they inflected the genre’s syntax, in an improper and inappropriate way. They used cross references, fusion, irony and appeal.

They kept themselves on the verge of the allowable, conbining the possible with the impossible, good taste with bad one, classicism with baroque. In an exercise in which the borders are not the extreme limit but the starting point and the beginning of a new creative process, they aimed to transform their work into a game, achieving their goal. In a double, shared game”, Calvenzi adds.

So  the title of the exhibition, Double-cross, can be an useful input while looking at the photographs on stage. Other clues can be find in the authors’ own words:

“Life is an eternal movement, photography is eternal stillness. In this immense difference is its magnificence and its destiny as a creator of icons and of unreal, and almost magical, frames.” Giovanni Gastel

“Photography is my muse: it seduces me because it can embrace my interior world, my desires transforming them into images.” Toni Thorimbert

Gastel was quite young when he started to work: he literally grew up watching (and photographing) the very beginning of prêt-à-porter. His creative research went on for more than 25 years, reflecting the evolution of fashion in this period (from the Made in Italy onwards), but also cultivating his interests in fine art photography.

Following his interest in experimentation, he introduced techniques such as “old mix”, cross processing, pictorial reworking into contemporary fashion photography. All this produced dreamlike and symbolic images, sometimes surreal ones. His style, which reflects culture, elegance and charm, is marked by  ironic poetics, while his passion for art leads to extremely balanced compositions.

It’s somehow close to his fascination for poetry (Cinquanta is the title of his last collection), something closer to interpretation than to the description of reality, something new which goes beyond the framework of classical representation. His images reflect also his interest in the style of Irving Penn and Richard Avedon.

As a photographer, Toni Thorimbert used to delve into many fields, from fashion to reportage. Different themes, though connected by his ability to produce complex images, with multiple layers of meanings and complex relationships among people within the photos. So, even the background of a fashion image is not merely a location, but something symbolic, a sort of state of mind.

Being a reporter, portraitist and fashion photographer, capable of continuously reinventing his relationship with photography often forestalling trends, in the eighties he contributed to the renewal of fashion photography, settling, for example, the scenes in the streets, putting together fashion and reality. He was a key player in defininig the role of photography in communicating the success of the made in Italy.

His way of conceiving photography is somehow close to William Klein’s ideas. You can feel the presence of the photographer within the photo: the scene inevitably is modified because the image is the result of this interaction. Thorimbert brings the attention of the viewer towards the people, in order to understand or, at least to wonder about their identity, maybe with a touch of irony

Giovanni Gastel (Milan, 1955) was born from Giuseppe Gastel and Ida Visconti of Modrone; his uncle was the famous film director Luchino Visconti. In the seventies, he got in contact with photography for the first time. Since then, he started a long period of apprenticeship, until in 1975-76 he was offered the opportunity of working with the auction house Christie’s. The turning point was in 1981, when Carla Ghiglieri became his agent and introduced him to the fashion world.

His first still-life was published on Annabella magazine in 1982, then he started collaborating with Vogue Italia and with the magazines Mondo Uomo and Donna, when he met Flavio Lucchini, director of Edimoda, and Gisella Borioli. Because of his high commitment with the photography world, he got in contact with the Italian Association of Professional Photographers: he has been president of it since 1996 to 1998, then honorary president. In 1997 the Triennale di Milano dedicated him a solo exhibition, curated by the contemporary art historian Germano Celant. In the following decade his name appeared in specialized magazines together with the most known international photographers. In 2002, within La Kore Oscar della Moda event, he received the Oscar for Photography. He is permanent member of the Polaroid Museum of Chicago.

Toni Thorimbert (Losanna, 1957) started to shoot when he was very young, documenting the social and political tensions of the Seventies. During the Eighties his close collaboration with magazines, such as Max, Sette and Amica, is essential for the definition of the period’s visual standard. He holds workshops on photographic language and he used to be critique curator of the exhibition Immagini dal mondo interno, a collective (within the Rencontres Internationales de Photograhie D’Arles 1998) on feelings and human relationships, dealing with photography thought as an active part of a self-analysis and awareness process.

The book Transfert (2000) is an anthology dedicated to Thorimbert most personal work. Since then he went on collaborating with international magazines such as Details, Mademoiselle, Wallpaper, and Italian ones, such as GQ, Rolling Stone, Sportweek, Io Donna, Style, and producing prestigious ad campaigns. In 2006 the volume Carta Stampata gathered thirty years of fashion and portrait photography, while Tabularasa (2012) was a book on Vasco Rossi’s life created with Efrem Raimondi.

His work has been shown around the world in solo and group exibitions. His photographs were acquired by the Collezione Fotografica della Città di Parigi and from several museums and organizations in Italy and abroad.