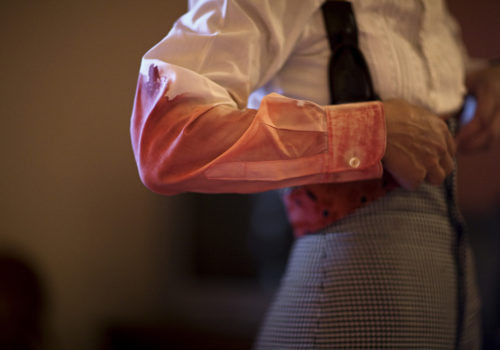 Like Hemingway, Picasso and so many other artists, Gina Levray is fascinated by the corrida (Bull fighting), this art of killing with nobility, its symbolic conflict between man and beast. Five years ago, the photographer set off for Madrid to document women bullfighting. She has discovered a universe marked with traditions, violence and sensuality.

As a humanist, the photographer is interested primarily in its actors and their everyday life, their privacy. Her pictures do not mainly portray the combats. Gina Levay is interested in the backstage of the corrida. She pictures the preparations, focuses on the details of the clothing, moves around the hallway that leads to the warm sand in the compound. Her series is a poem to the passion for this brutal art performed with absolute finesse.

One must have character to dare to face 500 kilograms of pure muscle. Men have the courage since the 18th century. Women, for a long time excluded as a consequence of codes and tradition, are performing it only since the last 50 years. With Bullfight, Gina Levay, driven by the feminine solidarity, stands for “toreras” that rock the prejudice and “fight male chauvinism”.

At Zaragoza, Gina Levay joins firstly Mari Paz Vega. This girl of a modest novillero and a daughter of a banderillero is also the first to have accomplished in Spain the complete protocol for Matadors: alternative in 1997 and further confirmation, as it should be, in Madrid. Or even Marie Sara, one of the ascending figures in feminine bullfighting in France, and also following Lupita López with her camera in Mexico. She has turned this important performer one of the main characters of the series.

Of all the women that she describes as “tenacious and with a strong personality, never totally respected in this male governed circle”, she depicts the grace and the femininity. In the midst of the combat, of the theatricality of the scenes, the costumes and the colors, these modern combatants bring a certain sweetness to the antipode of the image often rendered of a corrida as a bloodbath. The sport is therefore transformed into a delicate and seductive dance that Gina Levay immortalizes with sensitivity.

The sweet and soothing feminine presence falls within the symbolic in a universe where religion is omnipresent. There is something of a Madonna in the torera. In the moments of solitude, the looks, clear and pure, are sometimes frozen. In only an instant, fragility takes over. But when it’s about getting into the ring, “the eyes turn into those of a precise killer”.

Gina LeVay, 32 years old, has studied photography in New York’s School of Visual Arts, where she lives and works on her projects, independent or commissioned. Bullfight is her fourth solo exhibition, five years after her remarkable Sandhog Project, that took her to follow minors in the New York subways.