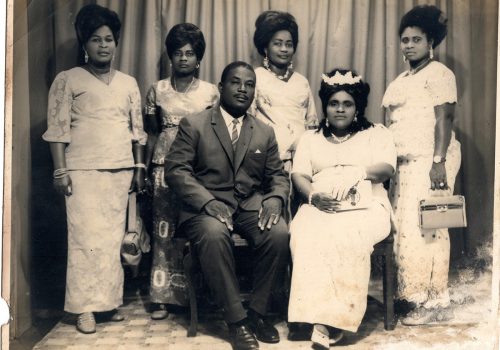 Ghanaian photographer Felicia Abban is exhibiting at the 12th edition of the Bamako Encounters which takes place in Mali from November 30, 2019 to January 31, 2020. For the first time in her long and rich carrier as a photo studio owner in Accra since the late 1950’s, but also as the one and only woman among the official state photographers of Ghana’s first Republic, her work is shown at the African Biennale of Photography, as part of the eight “Solid Rocks” selected. Curator Kwasi Ohene-Ayeh explains why it was important for the biennial to present Felicia Abban’s work in the context of its 25th anniversary.

The Eye of Photography (ODLP): Kwasi Ohene-Ayeh, you are one of the three co-curators of this 12th edition of the Bamako Encounters. Can you please give us more insight on your background and how you ended up working on the biennial?

Kwasi Ohene-Ayeh (KOA): I am a Ghanaian artist who has acquired a politically indifferent attitude to making art. I would say that being based in Kumasi and belonging to blaxTARLINES’s dynamic community of artists and non-artists alike has conditioned this disposition. blaxTARLINES is the experimental contemporary art incubator responsible for demystifying artistic practice from the straitjacket of classical and pre-1960s European modernism in the Department of Painting & Sculpture at the College of Art in Kwame Nkrumah University of Science and Technology (K.N.U.S.T), Ghana. I am presently a Ph.D (studio) student at the same institution. With this background I consider writing and curating as extra mediums through which to think about as well as create things in the world. Although my writing practice has been with me for some time, I developed the interest in curating in 2015.

With respect to this anniversary edition of the Bamako Rencontres, my participation became possible after I was approached by the artistic director, Dr. Bonaventure Soh Bejeng Ndikung, earlier this year to join the team. And I must say that it has been a great honour working in the curatorial team comprising him, Astrid Sokona Lepoultier, and Aziza Harmel to realize this transitional edition of the biennale.

ODLP: It was dear to your heart to be able to present Felicia Abban’s work at the 12th edition of the Bamako Encounters. Can you tell us more about her work and her career?

KOA: It was actually Bonaventure’s request to include her in the exhibition and I thought why not? Mrs. Felicia Ewurasi Abban (whose maiden name is Ms. Felicia Ewurasi Ansah) was born in 1936, and apprenticed with her father, J. E. Ansah, from the age of 14 years in his studio at Sekondi in colonial Gold Coast (pre-independence Ghana) before setting up her own studio circa 1956 in Accra. For me the artistic value (and exhibition value for that matter) in her photography is a retroactive redemption of sorts since her work would traditionally be considered within the domains of photojournalism, documentary and commercial photography. In terms of the former, she worked for the daily newspaper Guinea Press Limited, now known as The Ghanaian Times, and her stint with Kwame Nkrumah’s official press corps during the early Republican years of Ghana until 1966 when the military coup ousted Nkrumah’s Panafricanist regime. Then there are her freelance events (of documenting weddings, birthday ceremonies, child naming ceremonies amongst many others) and studio photography for which her studio in Accra offered a commercial outlet.

What I mean by retroactively redeeming the artistic/exhibition value in her work is that even though for over fifty years of practice she might have been working with the concerns of photography as craft or as profession and not necessarily with the intention of an artist as such, there is still something latent in her oeuvre which can be wrested in the direction of art. But this is only possible if we consider art in its contemporary understanding as that which also “encompasses all creative expression valued for their contemplative, aesthetic or theoretic value”[1] irrespective of [modernist] fictions about what makes something art or not. I am aware that this proposition opens the space to say that anything then can become art: and that is precisely the point at stake here. This is the operative thesis for the radical secularization of the thing called art attained in the epoch of globalization which also tends to what we call emancipation in art. And it is up to us to critically come to terms with the complexities contingent on such an axiom.

ODLP: Why do you think it was primordial to show this work at this event, particularly in the context of the celebration of the 25th anniversary of the biennial?

KOA: I think it is seminal to include her in the category of “Solid Rocks” in this edition of the Bamako Encounters to celebrate her legacy and influence as a photographer who inspired many generations of lens-based media practitioners. She is also the first known woman photographer from Ghana and has chalked many feats throughout her illustrious career. For example, her early mentorship of Kwaw Ansah— her younger brother, who became one of the most important Third Cinema filmmakers in Africa in the late twentieth century— cannot be understated. Also, during her time as the first woman president of the Ghana Union of Photographers Mrs. Abban engaged in countless training and workshop programs around the country.

ODLP: You have started an archival project of her work together with colleagues of yours which are based in Ghana too. Who, how, and what is behind this project?

KOA: Yes. I have been working silently with Adwoa Amoah, Ato Annan, Bernard Akoi-Jackson (Ph.D) and Kelvin Haizel (we are members of the Exit Frame Collective) to record and preserve her legacy and to be able to work with the Abban family to make what is left of her lifework accessible for research, exhibitions, archiving and other public initiatives. We have also reached out to other colleagues of ours such as Eric Gyamfi and Ibrahim Mahama to discuss future possibilities of how to make this happen as we work to canonize her in her own right and produce knowledge through her lifework at the same time. We want to be able to think of her work in relation to pre- and post-independence periods in Ghana; while connecting the histories of photography on the African continent to those of elsewhere around the world; and thinking through the evolution of photographic technologies from the early twentieth century until now. It is a longterm project we have embarked on and are happy to have her accept us and to work with us in this direction…

ODLP: Thank you Kwasi for this insight into Felicia Abban’s biography and work and for undertaking action to honor her legacy. Let’s now invite the public to discover or rediscover her work which is on view at the National Museum of Mali until January 31st, 2020.

An interview by Astrid Sokona Lepoultier