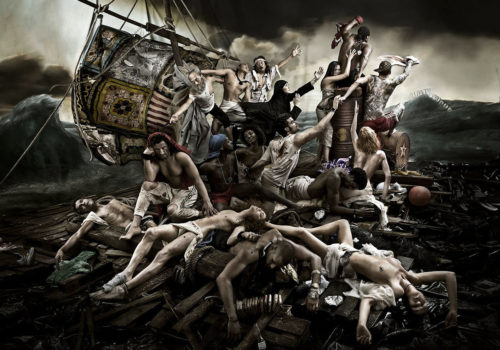 It is from their impetuosity and their desires that Men draw their strength to perpetuate History. Driven by a dynamic of insatiable curiosity, a desire to surpass oneself, constantly renewed discoveries, they have the audacity to form new dreams. They never stop writing their story, these inventive, courageous, daring men for whom nothing is impossible.

In 1969, they marked one of the most important events in their history: they walked on the moon! they could see the Earth from afar!

The only threat to man is himself. He created with his intelligence and his fears the possibility of his own end. He invented the atomic bomb. Thus, 1945, marked  the first most important event in his history: Hiroshima.

Man continued his journey, between these two major and symbolic breaches of his history, filled with rage and desire, his heart still beating.

So go Men, full of genius and sagacity, always pushing the limits, never short of inventions and yet so fragile, so contradictory and complex. They stand, guided by their intelligence, one foot in evolution and modernity, the other in self-destruction, and they move forward balancing.

Gérard Rancinan and Caroline Gaudriault sign their own curation of their exhibition “Of rage and desire, the beating heart of Men”, in three parts.

The Metamorphoses tell the story of Man. This repeats and renews itself according to the changes of times and current events. The history of art from cave art representations to contemporary art tells of the great human mythologies that we find today: the environment, his quests for an elsewhere, his fears, his battles. Géricault, Delacroix, Leonard de Vinci, Hieronymus Bosch … have captured the fundamental themes that led men in their history, reaching out to modern and contemporary artists giving their own interpretation and becoming themselves the witnesses of their time.

The Wonderful World is this new world made up of illusions, like a giant amusement park -or rather an abstraction park if we dared to play on words-, where Man, after having conquered the planet and made the industrial revolution, dreams of absolute happiness. As proof, he dethrones all the icons of the ancient mythology, religious cultures to impose an iconography with a permanent smile: Mickey. He goes further, hopes to save the world and invents Batman. The Earth is getting too narrow for all of his desires. He dreams of Mars. He dreams of a parallel, virtual world. Convinced, Man moves in denial of reality.

The Little Man in a Vast World confronts man and his possibilities. As tiny as he is in his ecosystem, he knows he can play on his destiny: it’s a matter of choice. In front of him, there is an infinite geometry of possibilities. These are political, humanist, ecological choices. He keeps asking himself this question: is there a meaning in Human History or does he allow himself to be lost in the invariability of the chaos of the universe? If he does not find an answer, at least he can ask himself the question of the inspiration of the paths to take. Virtuality, transhumanism, humanity, reality: just like the atomic bomb, there are still choices that depend on him. He will have to seek, between shadow and light, between rage and desire, a possible path through which to escape.

This exhibition is co-produced by the “Foundation of Museums of the Kingdom of Morocco” and the “MohammedVI Museum” in Rabat.

“Of rage and desire, the beating heart of Men”

Museum of Modern and Contemporary Art Mohammed VI of Rabat