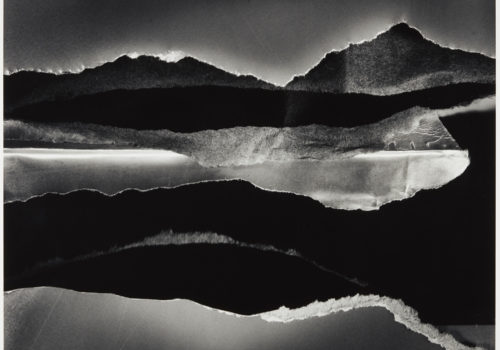 The George Eastman Museum, presents a retrospective of artist Carl Chiarenza’s (American, b. 1935) nearly seventy-year career this winter. The exhibition, Carl Chiarenza: Journey into the Unknown, was curated by William Green and will remain on view through June 20.

This retrospective exhibition spans the Rochester-based artist’s entire career, beginning with early photographs Chiarenza made as a high school student in Rochester in the 1950s and concluding with a large selection of his most recent collage work. It highlights his accomplishments not only as a photographer, but also as a longtime professor of art history, a renowned critic, and an award winning biographer. The exhibition gives visitors the opportunity to follow the continuities and ruptures in Chiarenza’s artistic journey as his career enters its seventh decade.

At the heart of Chiarenza’s work is an exploration of the very nature of photography. Throughout his career, Chiarenza has demonstrated that photographs can provide much more than just documentary evidence. Whether photographing the postindustrial landscape or torn-up scraps of paper, Chiarenza uses the camera to transform his subjects into new, formally sophisticated and psychologically complex images. His photographs often bear little resemblance to their actual subjects and instead suggest mysterious worlds that viewers are invited to explore.  In this way, Chiarenza makes photographs that are evocative and introspective, and that function more like music or poetry than the documentary medium we too often expect photography to be.

About the George Eastman Museum

Founded in 1947, the George Eastman Museum is the world’s oldest photography museum and one of the largest film archives in the United States, located on the historic Rochester estate of entrepreneur and philanthropist George Eastman, the pioneer of popular photography. Its holdings comprise more than 400,000 photographs, 28,000 motion picture films and three million archival objects related to cinema, the world’s preeminent collection of photographic and cinematographic technology, one of the leading libraries of books related to photography and cinema, and extensive holdings of documents and other objects related to George Eastman. As a research and teaching institution, the Eastman Museum has an active book publishing program, and its L. Jeffrey Selznick School of Film Preservation’s graduate program (in collaboration with the University of Rochester) makes critical contributions to film preservation.

Carl Chiarenza : Journey into the Unknown

on view through June 20