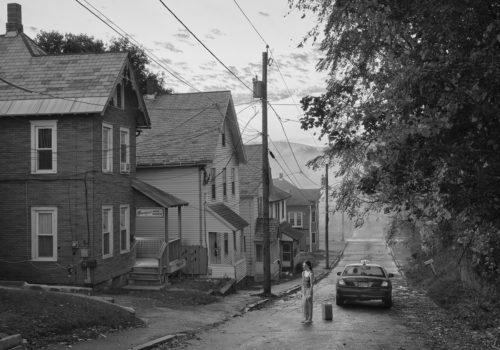 The Gallerie d’Italia – Torino, the Museum of Intesa Sanpaolo presents its first major fall exhibition “Gregory Crewdson. Eveningside”. Until 22 January 2023, the museum will devote the majority of its recently-opened 10,000 square meters of gallery spaces to the internationally-acclaimed American photographer’s work, with the world premiere of a brand new eponymously-titled series of photographs, Eveningside (2021-2022) as the exhibition’s centerpiece. Crewdson’s Eveningside pictures, produced in part as a commission by Intesa Sanpaolo, were envisioned by the artist as the final movement of a trilogy spanning ten years of work.

The exhibition is a survey of that trilogy, curated by Jean-Charles Vergne, beginning with Cathedral of the Pines (2012-2014) and An Eclipse of Moths (2018-2019,) as well as Crewdson’s earlier minimalist Fireflies (1996) pictures. Additionally, Making Eveningside, a behind the scenes video projection set to original music by James Murphy of LCD Soundsystem and Stuart Bogie, the American multi-instrumentalist-composer will be on view in a state of the art multimedia room within the museum, adjacent to the exhibition.

In contrast to the slightly haunted, lonely, and remote forests of Cathedral of the Pines, and the vast, bleak, post-industrial landscapes in An Eclipse of Moths, in Eveningside, Crewdson explores moments of contemplation within the confines of quotidien life, in places of employment, and in moments just outside of those work structures. The figures populating the pictures are sparse, and are often seen through storefront windows, in mirror reflections, or positioned underneath the mundane proscenium found in the midst of their everyday routines: railroad bridges, doorways, porches, the overhanging roofline of a bank teller drive-thru, a dairy bar, a corner market, or a hardware store. Bringing his vantage point closer to the figures, using a heightened range of light and darkness, special effects such as fog, rain, smoke, and haze, and for the first time using his now ubiquitous full production and lighting team in a monochromatic palette, the result is a rich gothic atmosphere, evocative of film noir and classic cinema, but with the capabilities and clarity of the most current technology available in digital photography. Eveningside comprises 20 digital pigment prints, 87.6 x 116.8 cm. (34.5 x 46 in.)

All three series in the trilogy represent essential stages in Crewdson’s artistic journey and creative evolution over the past decade, themes ranging from the deeply intimate and personal, to existential and vast expansive views of the world, and reflection on his deep respect and admiration for the history of photography, painting, cinema, and other mediums, all reinvented to tell his own stories.

The Fireflies pictures offer both connective tissue and counterpoint in their simplicity, made in isolation by the artist in 1996, with two cameras on analog black and white film.

An exhibition catalog, with editions in Italian, French, and English, is being released to coincide with the opening, produced by Edizioni Gallerie d’Italia | Skira.
The exhibition is accompanied by a free public programme of #INSIDE meetings, talks with notable guests, and special events, on Wednesdays at 6:30.

The Gallerie d’Italia in Turin, together with those in Milan, Naples and Vicenza, are part of Intesa Sanpaolo’s public art and culture museum project.