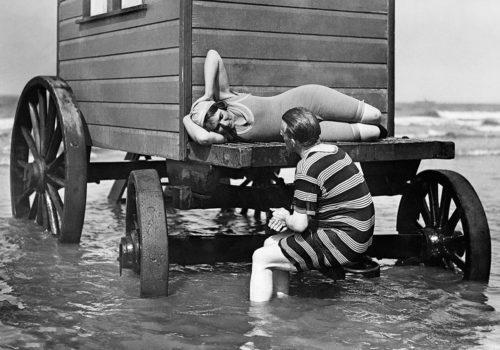 From the North Sea to the Mediterranean, it is an iodized breath that crosses the Galerie Roger-Viollet thanks to an unpublished series of panoramic and stereoscopic colored photographs.

These images, taken from 1860 until the early 1900s, depict a very different perception of the sea whether you are a summer holidaymaker in Nice or a shrimp fisherman in Calais. At that time, in the minds of most people, the French coasts seemed more dedicated to the economy of local labor than to emerging leisure.

Twenty years after the invention of photography, Parisians studio operators Léon & Lévy travelled along the coast, capturing the peoples of the sea, the regattas and the first baths in one-piece swimsuits for women and for men.

The Léon & Lévy studios, precursors of the stereoscopic image on glass plates (8.4 x 17.2 cm), panoramic views (16 x 42 cm) and very large format (24 x 30 cm), mark the beginning of an industry intended for a general public who had the opportunity to choose these catalog photographs.

Engineers from the Léon & Lévy studios invented a process for coloring the photos on a second glass plate placed between the positive image and the frosted one. Stereoscopic relief images then become even more realistic when viewed using a stereoscope.

These forty-eight images come from a collection of several hundred thousand glass plates, 110 tons of which were saved from destruction in the 1970s by Hélène Roger-Viollet.

Exhibited by Galerie Roger-Viollet for the first time, these modern prints on Bamboo Hahnemühle 290g paper are available in large format, in limited and numbered editions.

Moyse Léon and Isaac dit Georges Lévy began as assistants in the Parisian studio of photographer Ferrier-Soulier under the Second Empire.
They founded their own studio in 1864 and sold prints on albumen paper, mainly stereoscopic views, under the signature Léon and Lévy “L. L.”.
The Léon & Lévy firm took part in the Universal Exhibition of 1867 where it won the Emperor’s Great Gold Medal. In 1874, the Léon et Lévy studio became J. Lévy et Cie, Isaac Georges Levy being the sole director of the company from that date. When Georges Lévy’s two sons arrived in 1895, Ernest and Lucien, the company grew and became Lévy & fils, the works retaining the signature “L. L.”. This photographic firm had an intense activity, publishing prints sold individually, albums compiling travel photographs as well as postcards, all between 1864 and 1917, when they ceased their activities. The Léon & Lévy collection was bought in 1970 by the Roger-Viollet Agency.
Today, these glass plate negatives are part of the Parisian heritage. They are kept by the Historical Library of the City of Paris and distributed exclusively by the Roger-Viollet Agency.