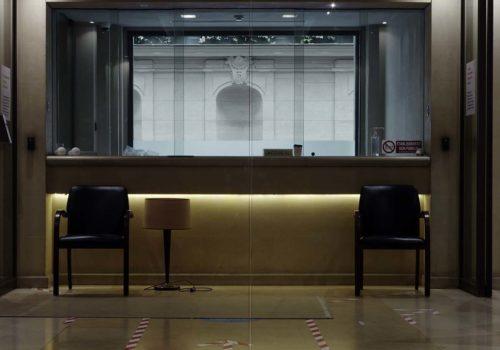 Until January 8, the Polaris gallery presents an exhibition by Eric Aupol entitled: Places of power (Des lieux du pouvoir). It is accompanied by this text:

“I walk once more along these corridors, through these salons, these galleries, in this construction of another century…” *

Photographing places of power, one at 121 boulevard Haussmann the other at 126 rue de l’Université in Paris. To photograph these empty spaces, to update the different strata which populate them and which are revealed to us like a memory in progress. No staging, only the seizure of these spaces temporarily abandoned, deprived of their function and their use, of what makes them places of power. All that remains for our gaze is silence and absence, power seems to be lacking, it is behind the scenes that Eric Aupol’s photographs reveal, the theater of power when it is dormant.

Eric Aupol has always used the photographic tool to show us what we cannot observe with the naked eye. The geometric rigor of the framing organizes reality and spaces like paintings that reveal the successive memories of these places steeped in history and representations of power. The velvety texture of the photographic grain, the subtle interplay of reflections and light give an incredible aesthetic to this new series as a whole.

The framings, often frontal, induce a distance in what could only be a topography of a space. The scale is not immediately given to the viewer, perhaps reinforcing the theatricality of the locations and shots.

This intimate relationship with space evokes spatial promiscuity. When Eric Aupol wants to account for reception, passage or work spaces, these ordinary places, of which everything indicates that they are crossed more often, or occupied in a very temporary way, he then chooses fragments, details, spaces of silence, of memory, spaces after but also before, objects that we often glimpse in partial or diverted ways from the frontal gaze.

The past of these places visited has no reality outside the moment when it is evoked with enough force, and, by becoming the present, as if it had never ceased to be. The traces recorded in these photographs are like testimonies of past and present events in these places, but they will never be the last.

*First sentence of the film by Alain Robbe-Grillet by Alain Resnais, Last Year in Marienbad