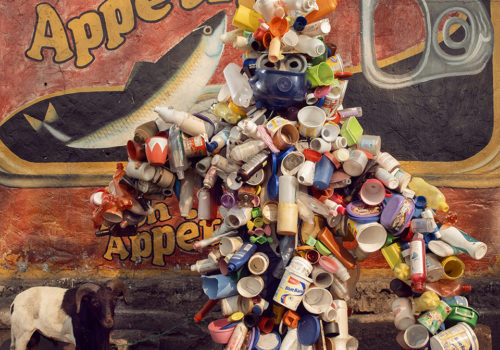 This gallery of full-length portraits produced in 2020 in Congo Kinshasa by Stephan Gladieu, is imbued with the narrative power of his previous series, and imbued with his chromatic DNA, which gives each of its images a real augmented reality on the borders of spirituality. and a galaxy of super heroes ready for some intergalactic battles.

Of battle it is, but it is above all to generate awareness to the inexorable accumulation of waste that is denaturing the planet, as much our oceans and here the African continent.

The second largest country in Africa, the Democratic Republic of Congo has one of the richest subsoils in the world in gold, coltan, diamonds, cobalt, oil … and yet remains the 8th poorest country on the planet.

The DRC is a geological scandal.

“What is born from the earth returns to the earth” said Euripides … In the DRC, we have corrupted the virtuous circle by transforming nourishing earth into trash.

Another paradox: from the waste that buries the slums of Kinshasa an artistic movement was born that borrows a lot from the approach of Arte Povera, a protest movement of the consumer society at the end of the 1960s in Italy.

It cries out its urgency to live and no longer to survive in the rubbish and injustice of the world.

Covered with a full mask made from rubbish, a generation of artists rises and unites in a collective thirst to claim the primary and visceral need to create and denounce. If the Congo has partly lost its animist and mystical traditions, dissolved under the pressure of the Catholicism of the former Belgian colonists, these young artists are returning to the traditional source of the African mask. An inhabited mask, bearer of spirit, symbol of an overflow.

This collective is “Ndaku, la vie est belle”; founded six years ago by the artist Eddy Ekete. Today it brings together nearly 25 artists, almost all trained at the Academy of Fine Arts in Kinshasa.

Painters, singers, visual artists, musicians, they all came together to denounce the tragedy of their daily lives, the wars that have resulted from it, the exploitation of women and men that results from it and ferments the unfathomable misery that deprives them of all dignity.

Originally, these artists had one thing in common: they had no resources, no support. Inhabitants of slums, they naturally found in the waste an abundant and free raw material. Eddy created the first mask, paving the way for the young artists around him.

“The collective welcomed me for two weeks to carry out this artistic project which is part of the continuity of my work. I remained faithful to my photographic biases by choosing to carry out the portraits in the streets of Kinshasa, the decor and the character responding to each other.

The street is the common story of these artists. Their collective organizes street performances to raise awareness among the authorities and residents. It was therefore legitimate to place them back in the reality of the Kinshasa ghettos.”