Galerie Nouchine Pahlevan : Christian Mamoun : I Want Him To Be Ocean 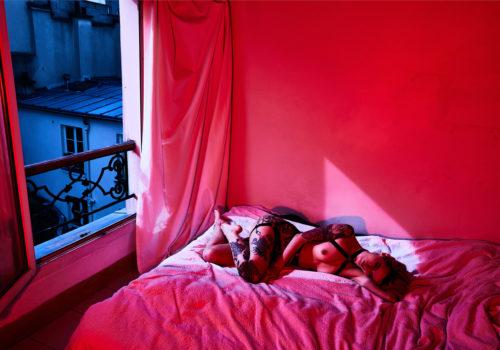 On the occasion of the month of photography and on the fringes of “Paris Photo 2022”, the Nouchine Pahlevan Gallery presents “I Want Him To Be Ocean” by Christian Mamoun.

This exhibition invites itself into the heart of a kind of waiting room before entering the adult world.

In the meantime, this Parisian youth are questioning themselves , confronted with “sturm et drang” impulses (the storm and the impulse), which they have decided to live intensely. Love, gender issues, or excessive partying are subjects that are at the heart of Christian Mamoun’s work.

Finally, how to feel yourself fully? Elements of response with this exhibition. Christian Mamoun was born in 1990. His mother is Franco-German and his father Moroccan. He spent his childhood in Berlin, where he attended Waldorf schools.

He was introduced to art and discovered the notion of freedom. Freedom of being, of movement and self-claim, which later will be transcribed in his work as an artist. After several years spent in Berlin, Christian decided to get closer to his paternal family, and flew to Morocco.

He stayed a year in the kingdom before making a decisive encounter on a dune in Merzouga. He made the decision to settle in France in order to pursue art studies at the Beaux-Arts in Nantes. He also cut his teeth at HEAD in Geneva and settled in Paris where he studied photography at ENSAD.

As far as I go back in my childhood memories in Germany, when we went to the lake, we were naked.

Being naked in public in the German culture was a banality, an evidence, it did not lend itself to smiles or shock. It just made sense to swim.

Today being naked seems to be a danger, a transgression, a lack of modesty. The word is out, we all have become more prudish, more puritans. The culprit is designated, it is the reproduction of the codes of the American culture which imposes itself everywhere on the images.

Puritan America won. The heart of the scandal.

Instagram gave in too. No, it has always been so in this world of photography. The rules are established. Those who transgress disappear, erased overnight, irrecoverable.

Artists who dare to go nude are under diktat, they lose visibility. Years of work go into digital limbo. Faded away. The dejected artist. The nipple of discord.

The Louvre in Paris or the Gemäldegallérie in Berlin bring us back to the real in art: the nude is our common heritage.

Millennium. I like this culture: it makes room for the nude, for eroticism. Everyone is free to project themselves into it. The vulva of resistance. I am in the European pictorial tradition and am radically opposed to

the cultural colonization of our values ​​by the applications of American “popular culture”. Resistance.

I tell and describe like the painters of the time, the stories of love, the hunger for life, the need to live the moment, the desire and “lust” of our generation between “angst” “lust” and “now” without next day, with a future that is not reassuring and without censorship.

Everything shown, far from the imposed canons. The body of subversion.

Assuming nudity today seems almost a militant act, a fight for the normalization of the body and its representation. It is beautiful, it tells us something about the time, it tells us about us. Radically in opposition to the culture of social networks.