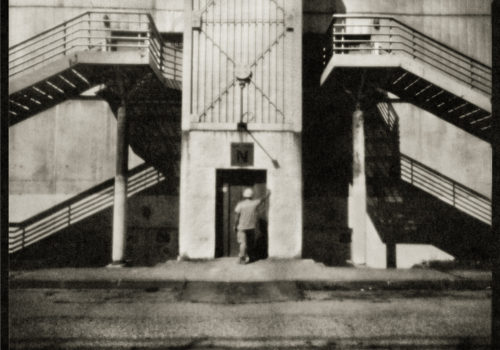 The Metropolis series offers both for sale and look, silver and piezographic prints made by means of the pinhole camera.

This minimalist optical process, which is similar to that of the darkroom, links us closely to the origins of photography and shows, if it were necessary, to what extent the photographic work is the result of the work of interpretation of its author.

As the title of the exhibition “Metropolis” suggests, this is obviously not about a documentary approach but on the contrary of an approach guided by a quest for aesthetics. Unlike the eponymous film, Christian Poncet offers a vision that is both utopian and dreamlike of urban space.

Between reality and fiction, the photographic works presented give to see sublimated architectural landscapes, within which evolve human silhouettes which, although representing the movement, seem strangely static. Instants suspended in a temporality with diffuse borders, Christian Poncet’s photos subtly handle opposites, thus opposing movement to stillness, the present to the past, shadow to light. The result of meticulous staging, these photos, often enigmatic, prompt the viewer to question the meaning of “reality” that is given for him to see.

In ancient Greece “Polis” meant the City-State, a community made up of free and autonomous citizens, a human and social structure which implies that without human community there can be no state. Through the “Metropolis” series, Christian Poncet plays the card of ambiguity in the relationship between humans and the City. Which of the two justifies the presence of the other?

Faced with the immutable dimension of concrete structures with shapes cut out by “solar shadows”, the living figures seem to be present only in the end to induce a notion of scale. The citizen is no longer the justification of the places which shelter him but their foil.

Paradoxically, for Christian Poncet the location is not in itself of importance either. It doesn’t matter whether the photos were taken on the La Doua campus in Lyon, Montpellier or elsewhere!

Far from postcard images, what counts above all is the singularity of the place, its lines of force, the structuring of the different plans that constitute it. In these urban compositions of ineffable sobriety where the units of time, place and action are diluted, the presence of human figures makes, like the film, each photo become a memory of the world … but which one?