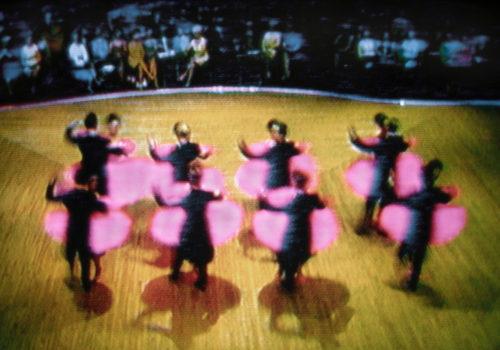 The spring 2022 exhibition at Galerie Miranda brings together exceptional vintage prints by two cult and pioneering photographic series, Dirty Windows (1994) by Merry Alpern and TV Shots (1972) by Harry Gruyaert. In particular, the exhibition features a selection of vintage Cibachrome prints by Harry Gruyaert that have never been exhibited or proposed for sale until now.

The exhibition is named after the seminal text The Society of the Spectacle by Guy Debord (published 1967, first translated into English in 1970), for whom “all that once was directly lived has become mere representation.” Thus, Harry Gruyaert’s series captures the ‘spectacle’ of a year of English television, broadcast throughout 1972 on a broken London TV set that transformed all information into lurid, pixelated pop art tableaux. Photographed twenty-two years late in 1994, Merry Alpern’s series captures the ‘spectacle’ of stockbrokers being entertained by scantily-clad young women, viewed and recorded by the artist through the bathroom window of a lap-dance club in Wall Street, NYC.

In TV Shots (1972), the psychedelic jumble of advertising, news, soap operas, films and sport, captures and critiques the fragmentation and monetization of daily life driven by the growing power of television; in Dirty Windows (1994), real life, cinema and consumption converge in the grainy, sensual images that record a nightly NYC show of wealthy men paying young women for sexual entertainment. The staged entertainment of Gruyaert’s TV Shots and the real-life spectacle of Alpern’s Dirty Windows are differenciated by their colour choices – a saturated pop palette for the first and contrasted black and white for the second – yet united by their photographic composition, both structured by the presence of a dispositif – screen, window – behind which each artist is viewing spectacle and spectators.

50 years have gone by since the realisation of TV Shots and over 30 years since Dirty Windows; with each decade, a new technological step has been taken in the relationship between society and spectacle, with reality and screen-life increasingly converging. These evolutions and their impact on society have been recently commented in photography by artists such as Michael Wolf (A Series of Unfortunate Events, 2011); Doug Rickard (A New American Picture, 2012); Arthur Jafa (Love Is the Message, the Message Is Death, clip for Kanye West, 2016).

The ongoing tension between human experience and its technological interface, and the artistic quest to understand and record them, is neatly expressed in the preface to a recent artist photography publication: “We want desperately to be human in the face of our cold inanimate translator. We hope that somehow the act of witnessing will make us more human, and not less.” (Jia Tolentino, preface to Surface Tension by Tabitha Soren, RVB Books, 2021).

Harry Gruyaert’s work is presented at Galerie Miranda in friendly collaboration with Gallery FIFTY ONE, Antwerp.

ABOUT EACH PHOTOGRAPHIC SERIES

In the winter of 1993, photographer Merry Alpern visited a friend’s New York loft, situated in the Wall Street district. He led her to a back room and from his window, one floor below, she could see a tiny bathroom window from which pounded the heavy bass of nightclub music. She realized that she was looking into the bathroom of an illegal lap-dance club, where “stock-brokers and other well-to-do businessmen handed over hundreds of dollars and drugs to women in G-strings and black lace.” Transfixed by the spectacle, the artist started taking pictures of what she saw, using a fast black and white film that gave the photos a peep-show quality. In 1994 she submitted the series to the NEA (National Endowment for the Arts) only to find her work, along with that of co-candidates Andres Serrano, and Barbara DeGenevieve, rejected and vilified by conservatives who sought to undermine the NEA, creating a huge debate that paradoxically served to promote the series. Acquired by major museums worldwide, the series has since become a reference point for exhibitions on female exploitation, surveillance, censorshiup and the female gaze.

In 1999, following the Dirty Windows series, Merry Alpern produced the series Shopping whereby, equipped with a tiny surveillance camera and a video camcorder hidden in her discreetly perforated purse, Alpern wandered through department stores, malls, and fitting rooms, capturing women enthralled in a mesh of consumerism and vanity. Printed as video stills, the grainy images titillate with messages of the taboo and confidential. The women try on clothes, inspect their bodies, squeeze into stockings and skirts, and gently fondle luxury products—lost in a host of private emotions and desires while existing in a very public space.

Galerie Miranda will present selected signed and limited-edition vintage prints from Dirty Windows as well as a unique work of vintage film stills from the series Shopping.

In the 70s in London, Harry Gruyaert made photographs of the distorted screens of a cathodic ray tube television:

“I was living in London in the early 70s and there was a crazy television set in my house. By playing around with the antenna and tweaking the controls I could suddenly obtain fascinating colours. This led me to spend a couple of months following the latest news as it happened from the first Apollo flights to the Munich Olympic Games, as well as American and English television series and ads. In those days, VCRs didn’t yet exist, let alone the ability to freeze frames or rewind. I was therefore face to face with current events, camera in hand and sometimes very close to the screen so I could frame things differently. Had there been more technical means at my disposal at the time, I think that the images wouldn’t have been as good or as fresh.”

His abstract and experimental images have a pop-art fascination with the everyday whilst acting as a document of the way millions of people experienced world-shaping events in the 1970s through their home televisions;

“When I discovered Pop Art in New York at the end of the 60s I realised that you could look at our consumer society differently, with both insight and a sense of humour. I felt a great admiration for artists such as Rauschenberg, Lichtenstein and Nam June Paik. I had thus become a kind of bedroom reporter confronted with the “society of spectacle”, in front of this factory of universal thought.”

The work created controversy when first exhibited in 1974, with its iconoclastic assault on the culture of television and its radical challenge to the conventions of press photography. Initially shown at the Delpire Gallery in Paris followed by the Centre for Fine Arts in Brussels and International Center of Photography, New York, the images were printed on long rolls of photographic paper 50cm wide and then hung side by side on the wall, creating a kind of gigantic, terrifying fresco. Galerie Miranda will propose selected signed and limited- edition vintage and contemporary prints from the series.

Merry Alpern is a contemporary American photographer known for her controversial oeuvre and utilization of surveillance photography. Born on March 15, 1955 in New York, NY, Alpern studied sociology at Grinnell College in Iowa, but returned to New York before graduating in order to pursue photography. Today, works from Dirty Windows and Shopping feature in major private and museum collections including the Whitney Museum of American Art, San Francisco Museum of Modern Art, Museum of Modern Art, National Museum of Women in the Arts and The Museum of Fine Arts, Houston. Works from the series were exhibited in 1996 at the Fondation Cartier (Paris) in a group exhibition entitled ‘By Night’; in 2010 at the Tate Modern (London) in a major exhibition entitled “Exposed: Voyeurism, Surveillance and the Camera” and in the 2017 exhibition at the ICP Museum (New York), for the group exhibition “Public, Private, Secret”.

Born in Antwerp, Belgium, in 1941, Harry Gruyaert studied at the School of Film and Photography in Brussels from 1959 to 1962. He moved to Paris to pursue a career in photography, then travelled extensively across Europe, North Africa, Asia and the United States. During his first trip to New York in 1968, he discovered Pop artists like Roy Lichtenstein and Robert Rauschenberg and in 1969, he made the first of many trips to Morocco, which led to a Kodak Prize for his Moroccan work in 1976. In 1982, he joined Magnum Photos. A number of solo exhibitions of his photographs have recently been held in Europe including the Fondation d’Entreprise Hermes, Paris, and the FOMU, Antwerp and his work is the subject of nearly 20 books including: Made in Belgium (Delpire, 2000); Harry Gruyaert: Rivages (Textuel, 2004); Harry Gruyaert: TV Shots by Jean-Philippe Toussaint (Steidl, 2007); Harry Gruyaert by Francois Hebel (Thames & Hudson, 2015); Harry Gruyaert: East/West (Thames & Hudson, 2017); and Harry Gruyaert – Roots (Editions Xavier Barral, 2018). Harry Gruyaert’s photographs are held in the permanent collections of the Centre Georges Pompidou; Bibliothèque Nationale de France; Foto/Industria, Bologna; Metropolitan Museum, Tokyo; Deutsche Börse Foundation, among many others.

Harry Gruyaert’s work is presented at Galerie Miranda in friendly collaboration with Gallery FIFTY ONE, Antwerp.