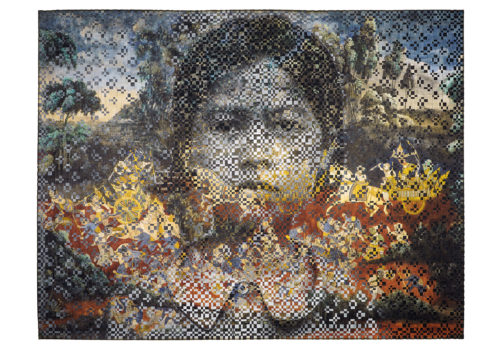 Vietnamese artist Dinh Q. Lê has been constructing a rich and complex body of work since the 1990s, using various techniques, in which photography plays an important role. However, Dinh Q. Lê is not a photographer. An image is for him a material to question, to cut out, to transform. The exhibition looks back on the career of this major artist, rarely exhibited in France so far. The chosen works retrace the main lines of his artistic practice over the past twenty years. Via photography, video, drawing, new and subtle ways of telling the close intertwining between geopolitics and lived history, between personal narrative and history, intertwine.

“Too often, we have seen our history told by others than us, or set aside.”*

As early as the 1990s, Dinh Q. Lê developed a technique of weaving images that calls on the memory of the gestures of his aunt weaving carpets. Weaving in turn images from vernacular photographs and hybrid images, that combine two registers of representation and produce a new image whose vision irremediably disturbs. Speech plays an important role in the concerns of the artist. Make speech possible, audible, and restore the complexity of History by those who have lived it, is a recurring line in his work. In many works, he questions artists engaged as such during the Vietnam War, allowing him to question more broadly the place of art and the responsibility of artists. His work has also contributed for several years to questioning the history of Cambodia and the representation of the genocide led by the Khmer Rouge regime. More recent works are made from photographs of migrants and evoke the dramas of crossing the Mediterranean.

After spending his childhood in Vietnam, then taking refuge in Thailand and the United States, before returning to live in his native country, Dinh Q. Lê experienced the uprooting, the return, and the eternal alienation of who has lived elsewhere for a long time. Without limiting his work to his biography, one can read in his production an exceptional intelligence of displacement, a poetry of alienation, a subtle sense of connection, immediately perceptible by all.

The title of the exhibition refers to his way of working with photography as a textile, by weaving images. He also recalls his tireless attempts to retie the thread of memory. The route of the exhibition follows the non-exhaustive chronology of the artist’s work for about fifteen years and brings together some twenty works.