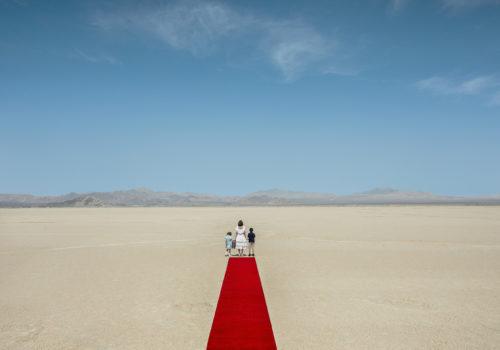 Galerie Les filles du calvaire presents a personal exhibition of the photographer Diana Markosian, entitled Santa Barbara. This presentation was previously exhibited at the MoMA in San Francisco, at ICP in New York, at the FOMU in Antwerp, as well as at Images Vevey in Switzerland and will be unveiled for the first time in Paris on the occasion of this exhibition.

After the collapse of the Soviet Union, one of the first American television programs to air in Russia was Santa Barbara (1984-93). Watching this soap opera from her childhood home in Moscow with her family, Diana Markosian saw it as a window into a world of fantasy, escapism and the American Dream. Santa Barbara, California became a mythical place that held an important place in the family’s imagination, and eventually, through her mother’s sacrifices, it became their home.

In her version of Santa Barbara, Markosian reconstructs and re-examines both the Russia and the United States of her childhood, tracing her family’s move in real life as their dream came true. As an extension of her documentary practice, the project allows Markosian to relive her childhood in her own terms, inviting us to enter the collective memory of her family, using family archival documents, staged images and a scripted film.

Markosian gives access to her family history, but also to her own process. The tension between performance and reality is accentuated by her desire to draw the curtain and expose her tools. Moving from Moscow to the United States, Santa Barbara tests and challenges the limits of truth, fiction, documentary and memory. —David Campany

Santa Barbara was initiated by the International Center of Photography (New York), in collaboration with FOMU (Antwerp) and the Galerie Les filles du calvaire (Paris).

Diana Markosian is a Russian-American photographer of Armenian descent. Her work explores memory and place through an interdisciplinary process that uses video, photography, drawing and ephemera. Her photographs have appeared in National Geographic, The New Yorker and The New York Times. Her awards include a fellowship from the New York Foundation for the Arts (2019), World Press Photo Award (2019), Magnum Foundation Fund Grant (2019), Elliott Erwitt Foundation (2018), Chris Hondros Fund Award (2015 ), the Firecracker Grant (2014) and Burn Magazine Emerging Photographer Fund (2013). She holds a Master of Science from Columbia University in New York. Her first monograph, “Santa Barbara” was published by Aperture in 2020. The project exhibition “Santa Barbara” has been shown at MoMa in San Francisco (2020), the International Center of Photography, NYC (2021), at FOMU d’Anvers (2022) and at the Les Filles du Calvaire gallery in Paris (2022). It will also be presented in 2023 at Fotografiska Stockholm.