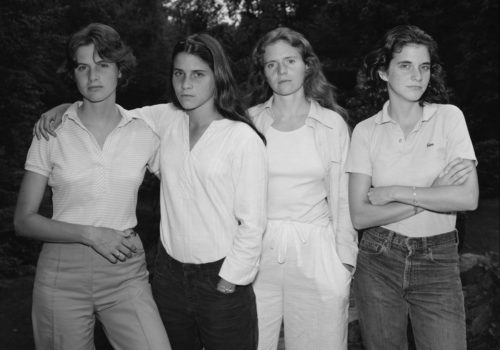 The Galerie le Château d’Eau presents the first major exhibition in France of Nicholas Nixon, an emblematic figure of American documentary photography of the last decades.

Nicholas Nixon has exhibited at MoMA New York three times, in 1976, 1988 and 2014, in personal presentations. Besides most of the major American museums, his works have been shown in European institutions in Hanover, Berlin, Brussels, Madrid and Barcelona among others. He is considered an absolute reference in documentary photography in its purest and most American way: in black and white, with a large format camera, with contact prints that he makes himself and with a tireless curiosity for the world in which he lives. The city like his family, AIDS patients – which he was one of the very first to photograph – like newborns, mixed couples or even nudes, details of his familiar environment like the trees for which he is passionate, children who punctuate the space or even elderly people at the end of their life, self-portraits, alone or with Bebe, his wife but also curtains which capture wind and light in front of a window, everything is a pretext to explore the possibilities of photography in its relation to reality.

“Nicholas Nixon’s gaze is a look at time. And over the years, it’s as if it’s become more acute, more demanding, close to vertigo. ”

To quote all these “themes” tackled by Nicholas Nixon, is to do justice to a work and to an approach that, almost always, has virtually been obscured by the masterful series the “Brown Sisters” for which, for 46 years, he has painted the portrait of his wife. and her sisters for an exemplary photographic ritual.

Strangely, it took until 2021 for an institution in France to present a monographic collection of Nicholas Nixon and allow the publication of the first French-language work of this septuagenarian, who has already entered the history of photography.

This was made possible thanks to the rich collection of the generous Maison Européenne de la Photographie, with the help of the Éric Dupont galleries (Paris) and the Fraenkel Gallery (San Francisco) and private collectors. A big thanks to all.

The exhibition presents, on the ground floor, all of the 46 photographs of the Brown Sisters, between 1975 and 2020. In the basement, extracts from the different series, including unpublished ones, show the consistency of a documentary approach which, over time, finds an increasingly close and intense distance to the reality represented.

On this occasion, and in co-edition with the Château d´Eau, Atelier EXB / Editions Xavier Barral is publishing the artist’s first monograph in France.