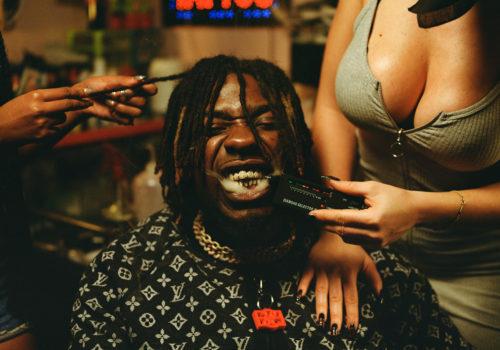 For 20 years, photographer and artistic director Fifou has been a privileged witness of the French rap music scene as well as an essential player in the construction of its image. With more than 800 edited album covers, some 201 projects in progress, and a hat on his head, earned him the name “The man with 1001 rap covers”.

At 14, Fabrice Fournier discovered the hip-hop group Wu-Tang Clan and dreamed of becoming a comic book artist. After studying visual art communication at Olivier de Serres, he created the logos of rap artists and became the person who graphically gave their identity. Self-taught, the young man explored photography. Two significant encounters will permeate his style. The famous fashion photographer and humanist Christophe Gstalder passed on to him his passion for the medium, the elegance of his gaze, his curiosity for the sacred, the taste for music videos and film photography. Thierry Le Gouès, French photographer with indelible colors, involved him in the design of the covers, in particular those of the magazine French.

His reputation grew, Fabrice became Fifou, urban music, his universe. Fifou became the reference for the visual identity of rap.

Each of his images are born first of all from storyboards that he draws himself.

In close collaboration with the musical artist, depending on his personality and the tone of the album, the visual of the cover will be developed. Unlike most celebrities, of all disciplines, to be better recognized, rappers hide their faces. It’s up to Fifou to hide them, blur them, shade them to better highlight them. Over time, the photographer has produced an impressive inventory of the different rap musical movements: Los Angeles gangsta rap, Trap, and more recently the Drill movement.

Like Claude Gassian, photographer of Anglo-Saxon rock and French song, or even Jean-Marie Perrier, emblematic photographer of the yéyé years, Fifou documented rap while instilling his own vision, his poetry, his humor and his commitments.

As he approaches his 40th birthday – and the 40th birthday of hip-hop -, this first personal exhibition at the Galerie Studio Harcourt marks a turning point in his career, the discovery of other universes, by opening the doors of the art market to him.

Harcourt became the owner of PHOTO.