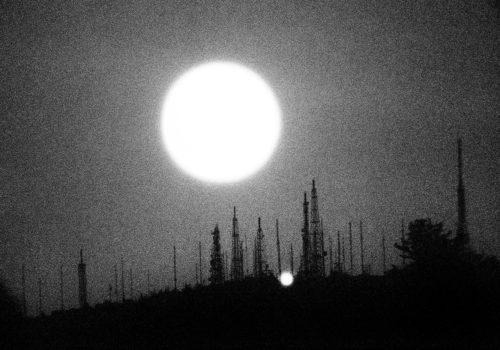 Finally, the Galerie Françoise Besson welcomes within its walls the photographic work of Stéphane Charpentier already glimpsed at in 2015 during the Éclairages exhibition on the first floor of the gallery. Alongside his photographic work, to which he has devoted himself fully since 2003, Stéphane Charpentier produces videos and films whose shooting spans many years. He was one of the initiators of the free rock group Oiseaux-Tempête, and is the curator and organizer of the collective projects Temps Zero which bring together international visual and sound artists.

Stéphane Charpentier produces an introspective and existential photographic work, with black and white film. The images in his series The Eclipse emerge from several thousand manually developed film negatives. This exhibition presents prints recently made in the darkroom, and echoes the eponymous book published by Sun/Sun editions.

The eclipse of Stéphane Charpentier could do without words, simply because it is an experience to live. The photographer chose the Greek territory for what is a much more sensitive immersion, and mystical ordeal, than the chronicle of a place. It is the Greece of crises, but we could just as well be elsewhere, where people live, suffer, rise and fall back in the face of the upheavals of the world. For ten years the space was lived in and all the contemporary chaos is visible, that the artist carries by a dreamlike bubbling towards a symbolic beyond. Places are nothing more than mental territories, invisible maps traversed by telluric currents that photography apprehends. This is not a classic documentation, there is no reality as such, but doors that open on perceptions reshaping reality.

The Eclipse appears much more like a work radiating the vibrations of things. Life is a shadow theater and the play that is playing out before our eyes is that of love, of struggle, of hope, of death. Death of the ideas of freedom in the face of the liberal dogmas that devour the city, its people, in an endless bulimia. Holy Economic War with dashed hopes. Love of Men, those in the light of the sea, those who dance in the crowd, those who dream.

Thirst for horizons with outstretched hands, unborn children. Violence contains joy, fire burns and revives, darkness brings illumination. And the sun, illuminating the World with its radiance, contains the seeds of new tomorrows like an apotheosis.

This exhibition benefits from the support of the CNAP (Centre National des Arts Plastiques) and Mediatone prints silver salts on baryta paper made in the darkroom with François Le Blond from the Moon Prints laboratory in Berlin.