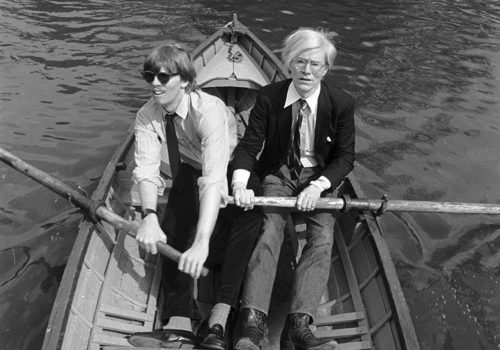 Christopher Makos puts it this way:

“There is a major Warhol show at the Musée de la Boverie in Liège, Belgium, in which I have some works  also, and the owners of the Galerie Faider, Maxime Hallez and Veronique Menu discussed the idea of showing more specific works at their gallery.  Showing works that havent been seen as much, like Andy at the Denver airport, standing behind the Country & Western singer John Denver’s experimental Bi Plane, or Andy on the West Side Highway with some Bikers that we just spoke to and they agreed to pose with Andy, or Andy in the back seat of his Rolls Royce reading the biography of Montgomery Clift.

What I liked most with Galerie Faider, is that this is really the first time they have shown photos, and they almost exclusivity show painters. But like so much in contemporary culture, I am so in favor of finding alternative venue, new spaces, whether brick and mortar, or online media outlets. Having come from a very traditional way of showing my works, early on in my career I had an exhibition in New York City at 360 Broadway in 1976, The show was called, “Step on it”, where I put all my photos on the floor, and covered the floor in Plexiglas. I wanted to manipulate the viewer, rather than always moving your head from left to right, I wanted the viewer to look, “up and down”, to make the view a participant on what I was doing, and so showing at Galerie Faider, a traditional painters space, fits right into my narrative of the, “New” spaces that for me, can be a painters gallery, a shopping mall, a beauty salon, instagram, TikTok, or any space where ones’s work can be seen, “clearly” This is the 21st Century!

Christopher Makos, born 1948 in Massachusetts, grew up in California and moved to New York after graduating from school. In the 1970s, he moved to Paris to study architecture and worked as an apprentice with Man Ray.

It was afterwards that he met Andy Warhol on the occasion of one of his exhibitions at the Withney Museum and thus began a relationship of friendship which led the 2 artists to travel and frequently work together.

At the end of the 70’s, Christopher Makos met Keith Haring and invited him to the Factory to meet Andy Wharol and so Keith Haring introduced Jean-Michel Basquiat to Andy Wharol.

These years 70-80 will give rise to many pictures known throughout the world.

Christopher Makos created in the 80s the Magazine INTERVIEW where he published photos of the New York art scene.

Christopher Makos’s photographs have been exhibited at the Guggenheim in Bilbao, the Tate Modern in London, the Withney American Art Museum in New York and the National Gallery in Washington.

His works can be found in particular in the permanent collections of IVAM in Valencia, the Reina Sofia Museum in Madrid and the National Portrait Gallery in Washington.

The exhibition on offer at the gallery focuses exclusively on moments with Andy Warhol and this is an extension of the exhibition “Warhol – The American Dream Factory” currently organized by Tempora at the La Boverie Museum in Liège.