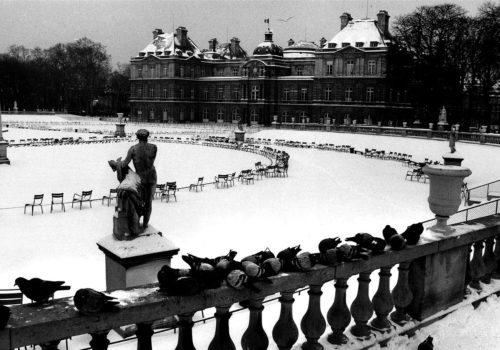 In a wounded city, the Galerie des Photographes is betting on the reopening and Paris.

A collective exhibition to celebrate photography and the city. Four artists from yesterday and today to see an anchored and timeless Paris.

A true witness to PARIS, Jean-Claude Gautrand has never ceased throughout his life to bear witness to what is no longer, to what is doomed to disappear. Thus, in the torpor of August 1971, he immortalized the dramatic destruction of the Halles of architect Baltard, a huge market in the heart of the capital whose glass and iron structures disappeared in front of his lens in the summer light dust.

Between 1979 and 1989, he roamed the Bercy district, south-east of Paris. A small Parisian village where the wine merchants were located, this authentic corner was sacrificed to fruitful real estate transactions. For ten years, he witnessed the disappearance of cobbled streets and wooden barracks.

In this group exhibition, we offer you emblematic prints from these two famous series as well as other lesser-known images that are to be discovered.

His photographic work is developed in two directions that intersect and constantly respond to each other. On the one hand, his approach to reality brings him close to a form of “poetic documentary”. He then speaks of his photographs as HABITATED LANDSCAPES. At the same time, for more than fifteen years he has been developing research on photographic material and the specificity of the medium, both in film and digital. To do this, he focuses on technical “accidents”, and revisits his photographs by comparing them using several printing techniques

His photographs are present in several private and public collections. He is the author of more than 20 monographic books including “HabanaSong”, “European Puzzle”, “American Puzzle”, “Marseille, Ville Natale”, “Tokyo Station”.

If her universe is urban, it is because it is essentially human. The relationship between man and his universe, the source of exile and pain, particularly touches her. Her images have been called interior landscapes. She does not believe in photographic objectivity, each image has no other purpose than to try to convey, to bring before the eyes an emotion, a thought, a feeling. The only truth sought is that of oneself. “It seems to me that you can only photograph well what you know. Paris is my setting, that of my life, of my wanderings, of my dreams above all and recently of my confinements. My Paris is the one that is invented with each step, which does not resemble each others, which imagines itself since in Paris the real is larger than the fiction “.

A photographer for years, she has exhibited since 2008 “beyond the eyes” “defeats” “Polar” and has published “my life in 16: 9” and “the winter traveler”.

For 30 years, Bellec’s work has been based on a search for encounters and visual harmony, in terms of colors and textures. Bellec instinctively works his artistic gaze, striving to bring out the poetic mystery hidden in the folds of the world around us. He seeks to capture the sensuality of the details and the crevices, which he will uncover, divert, sublimate.

On the occasion of the release of his new book on Paris, Bellec will disclose for the first time some of the superimpositions he has built with the idea of ​​creating “imaginary” places of a dreamed Paris.