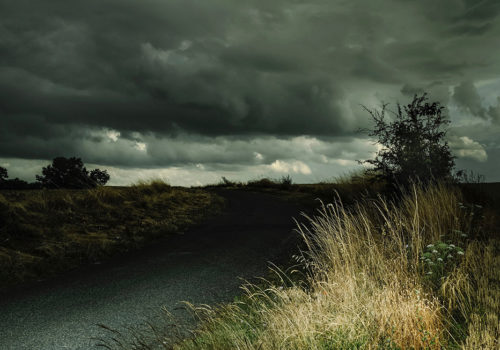 The gallery presents the exhibition Paris – La Seine, which brings together the works of Frédéric Stucin and Enzo Mianes in a cross-dialogue on their perception of the poetic power of the Seine.

In his last two photographic series, Frédéric Stucin immerses us in enigmatic nocturnal atmospheres created from scratch, in a process similar to that of the American night for the cinema. He photographs during the day, always before nightfall, and hides in the decor lights that gives the places he visits the appearance of photographic studios or film sets.

In La Source, he proposes going up the course of the river and exploring its surroundings up to its source. This series makes the Seine an unreal, symbolic place, which Frédéric Stucin immerses in a halo of strangeness and mystery. Rather than mapping or inventorying, this work deploys all the fictional power of the Seine and its surroundings, upstream of Paris, and opens onto a nocturnal fantasy populated by mysterious characters.

Following the course of the Seine, the exhibition continues in the heart of Paris with the Decor series. In the same photographic style, Frédéric Stucin captured the streets of the capital emptied of its inhabitants in 2020. He photographs a deserted Paris, which has become “a setting, the gigantic set of  suspended filming”, in his own words. We follow, from time to time, a few rare anonymous characters who walk with a hurried step in this twilight atmosphere.

At the same time, the exhibition compares these photographic prints against the works of contemporary artist Enzo Mianes, represented by the gallery mor charpentier. By producing sculptures from objects recovered from the Seine, Enzo Mianes questions the ability of the river to repress fragments of our lives. His work is the result of peregrinations downstream from Paris, of collecting snippets of intimacy and submerged treasures that the city has rejected.

By thus following the flow of the water, upstream, inside then downstream of Paris, the exhibition Paris – The Seine invites us into the fictional story of drifting slowly in the meanders of the imagination, leaning against to the memory of all the anonymous stories carried by the river.

In addition, the gallery has a “Photo Studio” event during which visitors can be photographed by Frédéric Stucin and leave with their portrait. This is a free event in collaboration with Leica, Profoto and Epson. This event will take place on March 26 at the gallery, starting at 1 p.m.