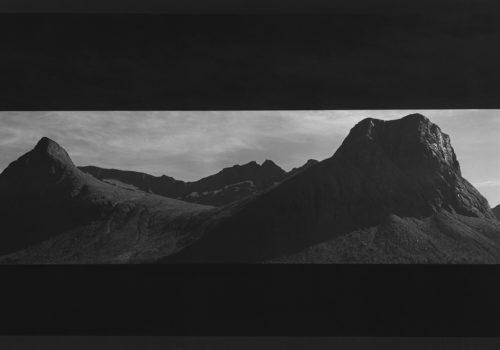 Over the past few years, photographers Witho Worms and Jens Knigge worked with the Nordic landscape. Worms photographed in Norway for his When you look at a landscape…, and Knigge’s series Contact – Northern Light was made in Iceland and Norway. Both projects are brought together in this duo-exhibition. Though they work with almost the same tools, large format cameras and handcrafted prints, they show clearly different views on the landscape.

Witho Worms (1959, NL) lives and works in Amsterdam. He was inspired by the concept of ‘rewilding’ by a writer and environmentalist George Monbiot. During the summer of 2016, Worms dedicated his journey along the arctic coastline of Norway to ‘rewild’ himself. After having photographed man-made landscapes for fifteen years, he immersed himself in a natural environment: untouched, wild and unpredictable. The prehistoric, uninhabited panoramas – sea, glacier and mountains – show Worms’ fascination with the interplay between nature, vision and the camera.

The series When you look at a landscape… comprises sixteen full frame (30×50 cm) contact prints. The detailed large-format views are presented as carbon prints, rendered in three layers using two different black pigments. The two ‘bone black’ image layers are on top of a shiny ink layer – showing every shade of black in the masked areas. Worms shows how we select when we look at the world around us. In his words: ”When you’re looking at a landscape, you change it, when you’ve photographed it, you have changed it.”

Jens Knigge (1964, DE) lives and works in Berlin. For the exhibition Around the polar circle he was invited by Witho Worms. His photo of the snow-covered Tufjorden on the North Cape is an ode to the light from the north. Softly lit white, in an almost abstract landscape that encloses the still grey water in the fjord. In the background – a wall of dense sombre clouds. A closed space that is only visible through the slowly returning light in winter. Knigge’s serene landscapes show pieces of rock and ice, snow-covered streets and quiet coves, small trees and bare rocks. Wherever he found traces of human civilisation, he combined those shapes with the surrounding landscape.

To name his series Northern Light seems almost ironic. Knigge made all his photographs in the wintertime, when there is almost no light in Scandinavia. He made a barely visible landscape to be seen, photographing under often harsh conditions. Using the platinum-palladium printing technique enables him to show all the subtleties that were captured by his camera. The rich grey tonal scale can only be achieved in this almost archaic analogue process. “When I face a landscape, I already see it in platinum.”

Worms and Knigge immerse themselves in the landscape and let them be absorbed by it. They captured it with large format cameras, and both are using 19th century printing techniques. One was travelling in the winter with almost no light. The other worked up his way above the polar circle in summertime with no darkness. Both celebrate the photographic print, from the lightest greys to the deepest blacks. They invite you on the same journey.