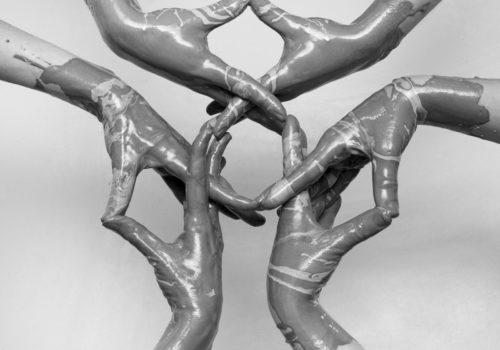 Nature * Patterns is a multidisciplinary photography-based exhibition presented by Galerie Caroline O’Breen (Amsterdam). Italian artist Maura Biava approaches her exhibition Nature * Patterns in a collaborative, sustainable and inclusive way, inviting visual artist Anne Geene (NL) and Emily Joyce (US) and a fashion designer Saskia Van Drimmelen (NL) to elaborate with her on the theme of patterns. The show combines several techniques and opens up photography to fashion, performance and tapestry art. Alongside photography, exhibited artworks include photography-based wearable art and tapestries, as well as sculpture, painting and work on paper. Biava approaches her exhibition in a collaborative, sustainable and inclusive way. Presented artworks explore and depict nature, together with its relation to mathematics and symmetry. Nature * Patterns revolves around the ideas of information and hidden geometries behind what we see in nature at first glance.

In the natural world, pattern structures are central to morphogenesis — the biological process causing cells and organisms to develop their shape. Together with symmetry and repetition, patterns often form order in nature. For many scientists, the capacity of humans to recognise patterns is considered a crux of our intellect and at the core of our ability to communicate, imagine and invent. Maura Biava believes that the antiquated position of a human being as a neutral observer, or at best an appreciator of nature, has run its course. Because we believed in this old-fashioned point of view, we became detached from the natural systems that we now know we are part of. According to Biava, a shift of attention from admiration to investigation will enable us to understand why things are formed and developed as they are.

Maura Biava — an Italian, Amsterdam-based artist — is inspired by the hidden laws of nature. She is intrigued by how the regular forms of the organic world originate according to specific mathematic rules. In her artistic practice, Biava aims to create works that follow the same principles. She employs analytic geometry and mathematics to create, understand and work with shapes and patterns. “The interaction between information, matter, and energy informs and shapes what we see, it forms our reality,” says Maura. To show this interaction in her work, she uses clay as matter, mathematics and numbers as information, and her actions and hands at work as energy. Maura Biava graduated from the Academy of Brera in Milan (1992) and the Rijksakademie in Amsterdam (1999). Her work as a multimedia artist was exhibited internationally, including the US, the UK, Australia, China, and all over Europe. Biava’s most recent presentation is a solo exhibition at Museum Beelden aan Zee in The Hague (2021). Her work is in the collections at the Stedelijk Museum Amsterdam and the Stedelijk Museum De Domijnen, Sittard, Kunstfort Centrum voor Actuele Kunst, Akzo Nobel Art Foundation and De Nederlandsche Bank.

The Dutch artist Anne Geene works with organic material and records visual similarities and phenomena in the natural world. The interrelation of coincidence and patterns is celebrated in her work. Emily Joyce, a California-based artist, investigates nature, the urban world, and art history through pattern-based rhythmic abstraction. In her paintings, she uses interlocking geometric compositions to communicate on a level that is realistic, logical, fantastic, and humorous at the same time. Maura Biava has also collaborated with fashion designer and activist Saskia Van Drimmelen. Working with Bulgarian women, she learned how traditional patterns and colours in garments derive from nature. In her work, Van Drimmelen uses almost vanishing crafts in contemporary fashion. In Nature * Patterns the artworks borrow the complexity of the language that nature uses to take its form and suggest the integral systems that our very existence is based upon.