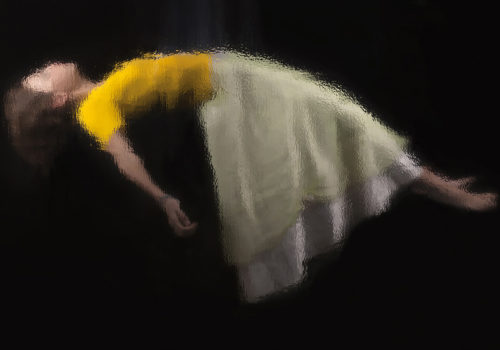 There is in Nançay, at the Galerie Capazza, a collective exhibition entitled Enfances (Childhood) where Laetitia Lesaffre presents her photos accompanied by the following text:

Childhood and exile are words that shouldn’t be put together. We cannot imagine them living together.

And yet in 2017, 18,000 children arrived in France alone, fleeing poverty, abuse, exploitation and war.

What does it mean to be an isolated migrant child in France? What part of childhood do they have left? What fate do we have in store for our children? It is in order to try to answer these questions that I set out to meet isolated migrant children who arrive in France: I recreated my life-size ‘dark room’ at France Terre d ‘Asile which welcomed me in residence.

Like Alice falling into the burrow, the migration route deprives the child of his own childhood, causes fear of forgetting, the erasure of the feeling of existing.

I lived with these children, I heard their testimonies and I photographed the reflection of each of them. Through this series I have sought to find the fragments of their lost identity, to express in my lacquered paintings their confusion and their extreme vulnerability, but also their determination, the courage that took them across the world …

Because they are children, but also heroes of their time.

They crossed deserts, they walked for kilometers at night to cross borders, they took the Balkan route, they found themselves lost in the middle of the Mediterranean, they braved the cold, hunger, violence, they have talents – drawing, singing, music, languages, they have a burning desire to learn. They are young migrants today and maybe future adults of the France of tomorrow.

They are waiting in this in-between which will decide their future.

The portraits that result from my meeting with them are troubled, without contours, just sketched out like their future in France.

Laetitia Lesaffre is a visual artist, lacquer painter and photographer, all of her artistic approach is about reflection. She photographs her subjects as a reflection in her lacquered paintings. Over time, his photographic work takes on a sociological dimension. Her series of portraits “DE-SOL-ES, exiled childhood” created in residence at France Terre d’Asile like her series “Kintsugi, reflections of women” anchor her work in contemporary reality.