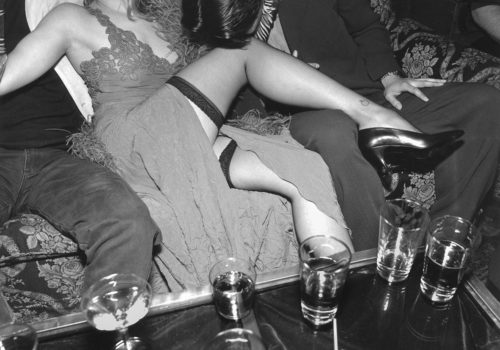 Larry Fink (*1941) has devoted 65 years of his life to photography. His work has been featured in solo exhibitions at the Museum of Modern Art and the Whitney Museum in New York, among others. Galerie Bene Taschen presents a retrospective with a selection of photo series, including The Vanities, Social Graces, The Beats, Somewhere There’s Music, and Boxing Images.

Fink gathered his first photographic experiences in New York and later relocated from Brooklyn to Pennsylvania. Attending The New School for Social Research in New York City sparked his interest in sociological perspectives.

People are at the heart of Fink’s work. His photo books focus thematically on the different social groups he has depicted. The Vanities brings together images of Hollywood celebrities at parties, which Fink captured over the years as either an invited guest or official photographer. His role is that of a silent observer, standing on the sidelines. Documenting the partygoers’ interactions, he captures precious moments of intimacy: a glance over the shoulder, a smile, an insecure gesture.

People enveloped in diffuse light are brought to the fore by the accentuated lighting. It is not their social status, but more subtle details that are conveyed, such as attire and attitude. Instead of being stylized from a distance and elevated to icons, they are depicted in banal situations.

In addition to Hollywood parties, Fink also photographed society’s elite at art openings, galas, and private receptions. In Social Graces, these works are juxtaposed with images he took of the Sabatines, a working-class family living in the rural town of Martins Creek, Pennsylvania. Details from ordinary life – from a cake celebrating a child’s 8th birthday to a plate of spaghetti – hint at the different family occasions. In bringing together these two vastly different worlds, Fink gives us a non-judgmental picture of society’s different facets.

When he was 17, Fink fell in with a circle of writers, painters, and musicians. Their desire for a more liberal society lives on in his photographs in The Beats. Fink has called himself as a Marxist, a “red-diaper baby”. He regarded his creative companions as a second generation of the Beats, a literary movement that emerged in the early 1950s in the USA. At the time, he lived next to his favorite jazz club. From a young age, he had grown up surrounded by jazz, and has described music as running through his veins. He himself is a longtime piano player and later took up the harmonica. The photographs from his series Somewhere There’s Music have the feel of a travel diary, bearing witness to the photographer’s encounters with musicians such as jazz legends John Coltrane and Fink’s great idol, Jimmy Rushing. Not only are both photo series visually compelling, they also subtly convey the political, social, and economic conditions at the time.

Fink’s Boxing Images take a similar look behind the scenes. His camera captures the discipline, anticipation, and ambition expressed by boxers and their entourage, both inside and outside the boxing ring. In his work, Larry Fink brings together photography, sociology, and his unique aesthetic. In scenes depicting iconic figures with strong contrasts between light and dark, Larry Fink’s famous black-and-white photographs evoke the old Baroque masters. His compositions are reminiscent of Caravaggio’s use of chiaroscuro and Rembrandt’s targeted lighting effects – translated into the modern medium of photography.

About Gallery Bene Taschen: Founded in Cologne in 2011, Gallery Bene Taschen represents some of the world’s leading artists in contemporary photography and painting. The gallery promotes its international artists through regular participation in major art fairs, such as Paris Photo and Art Cologne, as well as its extensive exhibition program. In 2011, Galerie Bene Taschen made its debut with LA photographer Gregory Bojorquez; a collaboration with Joseph Rodriguez from New York began in 2013. In 2014, the celebrated Berlin-based photographer Miron Zownir joined the gallery program. The American photographers Jamel Shabazz and Arlene Gottfried from New York joined the group in 2015. Since autumn 2017, the gallery has been pleased to represent the New York-based photographer Jeff Mermelstein and the German painter Charlotte Trossbach. Since autumn/winter 2019, the gallery has been working with the renowned photographers Sebastião Salgado and Larry Fink.