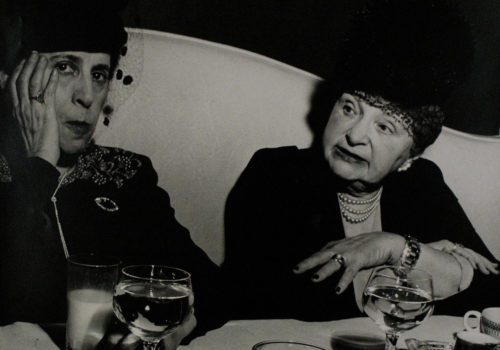 Baudoin Lebon presents Sidewalk by Lisette Model, an influential figure of the mid-twentieth century photography. She described photography as «the art of the moment», a motto that guided her vision throughout her career. From the 1930s onwards, she distinguished herself with her uncompromising portraits: women and men, acquaintances and anonymous people, the wealthy and the neglected, isolated or in a crowd. Her frontal photography produces edifyingly realistic portraits of the whole of society. In the late 1930s, Lisette Model emigrated to New York and began to photograph the city. Focused on the frenetic pace that particularly attracted her, she was fascinated by the passers-by and the clientele of the jazz clubs. After shooting, she worked in the laboratory, where she reframed her negatives to eliminate all superfluous details, to isolate the volumes in order to obtain direct, immediate images, full of strength and humanity.

In contact with the city, Model’s photography was transformed; without abandoning her portrait work, she seeked more graphic, more visual effects to evoke the urban frenzy and the turmoil it brings.

In the Running Legs series, she adopted a ground-level viewpoint, with the lens placed at the level of the feet of passers-by who, during rush hour, hurried through the streets. Dark silhouettes, legs of men and women crossing the street, walking on the pavement or climbing stairs, anonymous, bodiless, faceless legs, perfectly recreated the frenetic atmosphere of the modern city. While the Reflections series, an image of the city’s reflection projected on shop windows, focused on consumerism and the desire to consume. From these series emerged a characteristic style, unexpected shots, remarkably modern and uncluttered. Lisette Model’s favourite subject was not the city per se, but the inhabitants of the cities; even if they lacked identity, they were intrinsically linked to her fascination with the city.

This exhibition presents images from Europe and the United States, dating from the 1930s to the 1970s.

In collaboration with Avi Keitelman.