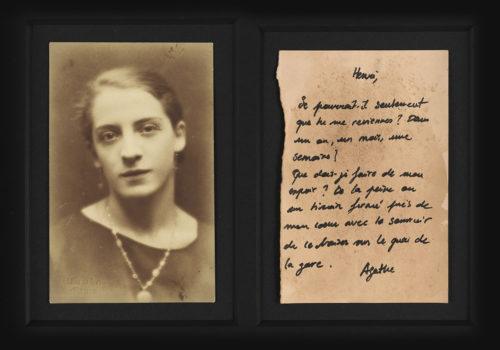 Amanda Sthers‘ exhibition has a crazy charm and at its origin, a very nice story! Here is the introduction by the author:

“About 15 years ago I bought an antique photograph of a young woman at a flea market. This portrait, which may have once been cherished by a man, lay abandoned in a box near some broken dolls, anonymous, without destiny. Back home, I gave her one through a letter addressed to her. From flea markets, to garage sales, over the years I have collected children, families, couples who were getting married, others who had trouble pretending in front of the camera.
I took the weak clues, the dates on the back of the photos, sometimes first names, the places and I invented stories for these people in what I imagined to be their language. Sometimes I associated them with objects or other photographs… Instead of being nameless ghosts in the dust, they are now the heroes of a shattering moment of life which becomes a reality as soon as others lay their eyes on them.
Everything in my life as an artist has led me to this special creation, it combines empathy, imagination, observation, aesthetics, the ability to sketch a story in a few sentences.
These works were intended for the walls of my house but I always needed more and I could not stop to invent this imaginary family tree.
At the time of the multiplication of virtual shots, the importance of these often solemn photos appears to us with even more evidence. At the time, we had four portraits which were to represent a life: a baptism, a portrait, a wedding picture, a family photo.
I met Katy Wellesley Wesley who first allowed me to think that I had created works of art that had to be exhibited, brought to life, then Laura Serani who is the curator of the exhibition that will put them in the spotlight and plunged into my album with the eyes of a child and the gaze of a sage. It is strange for me to have created unique works and to know that they will go to sleep with other people, continue their destinies without me.
Is it a coincidence that I expose them the year my second son will also leave the nest?
Welcome to a part of who I am. I am happy to introduce you to some of my imaginary friends and family.”