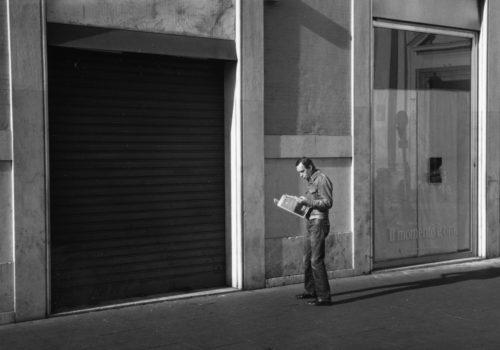 Frédéric Guy invites us to wander around Sotto Voce in the Roman palimpsest, in a low voice, as if whispered, in a temporal as well as spatial cycle drawn by the lights of a unique civilization, identifiable at first glance.

His first looks, Frédéric apparently got them from his father, a photographer in Algeria, who introduced him to the classics of black and white cinema. And even if he defines himself as an autodidact, the neo-realist visions of Italian cinema, the smell of scrap metal from his robust Leicas and the effects of Polaroid techniques will undoubtedly have shaped his aesthetic.

The game of finding the influences of the masters in an imaginary world is often futile because every photographer has nourished his gaze with the images that have built his sensitive universe. We can always refer to the soft atmospheres of a Stieglitz or fuzzy of a Dolorès Marat, to the poetry of a Sudek or to the constructions of a Kertesz, to the street photography of a Robert Franck or a Sergio Larrain, without forgetting the discolored ranges of the pictorialists discovered late, the “style” specific to any writer of light imposes itself on itself.

If we must retain an inspiration, it will be that of Bernard Plossu, whose delicacy, the freedom of framing and the approach of a clairvoyant “who leaves no other traces in space than images”, Frédéric admires. the humility that leads him to disappear behind them and to have nothing to prove. But also the taste for film which “composes with the time factor”, and the small formats which “create a distance with reality, fragment the scenes of life, underline intimacy”. Sotto Voce is composed from images, silver therefore, uncropped, unretouched, taken in 2012 with a 1948 Leica, and which rested for a decade for more hindsight.

Frédéric endeavored to favor the “atmospheres” which are dear and specific to him, and thus to translate his Roman metaphysics. But also to let the photographs resonate in diptychs and triptychs, which call for pivotal images capable of punctuating and letting the sequences breathe.

He felt free to play between symmetry and asymmetry, antique and baroque, harmonious scale and disproportion, purity of lines and blur, backlighting and flashes of light, realism and abstraction. The result is a wandering in a setting between earth and sky, from dawn to night, introduced by silhouettes lost on a portion of the horizon and by an emblematic bird which is reflected, unbeknownst to the photographer, in a puddle of ‘water.

Other birds call the trees, which call the stone of the ruins and the empty spaces of a theater awaiting its actors. The periods collide, a few appearances worthy of Mario Giacomelli, in atmospheres à la Gianni Bernego Gardin, outline decisive moments far from the implacable constructions of Henri Cartier-Bresson.

Then the gaze focuses on the materials and the shadows that animate, in the same way as the passers-by, the substrate of a city that not only generates “cliches” – and too bad if the term is still considered pejorative! – but cannot do without it.

The abstraction of shadow games seals the slow passage towards darkness. Back to square one in the world of cinema, an empty bench gives birth to Fellini poetry, everyone finds their dreamlike world, hears the music of their transfigured night.