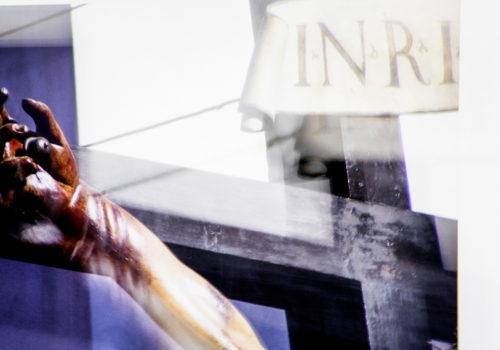 The S. S. Crucifix of Cutro and Christian piety

The statue of the Crucifix of Cutro is the work of the Sicilian sculptor, Fra Umile da Petralia and dates back to 1630.  It reflects the characteristics of the representation of the drama of Christ on the cross according to the dictates of the Counter-Reformation period. Fra Umile’s wooden statuary also reflects the Franciscan culture of the period and is motivated by the depiction of Christ by Spanish sculptors and painters. The Cutro Crucifix has three facial expressions: smiling, agonised and dead. This is a sign of unparalleled sculptural skill and an emblematic humanistic power of vision of a life in its various moments. The Cutro Crucifix goes beyond all epochs; it is a narrative testimony to the piety and poignant tenderness and emotionality that grips the human soul when faced with the act of the Crucifixion. And Cutro is devoted to its Crucifix, and since 1861 the feast has been celebrated there. So every year there is a minor feast, while every seven years there is the so-called ‘great’ feast, indicating it as an extraordinary event. Here is what I wrote years ago:

“The seven-year feast of the Holy Crucifix has precise origins dating back to 1800. In 1854 a severe drought struck Cutro and the peasants began to pray in front of the statue of the Crucifix so that it would grant them the grace of rain. As Monsignor Antonio Piterà said at that time: “This city, where everything is movement, had taken on the appearance of a necropolis, hunger ruled over it, and it seemed that for us the calamitous times of that obstinate aridity of land and sky had returned, which, under the reign of the wicked Ahabbe, afflicted the unhappy Israel”.

And the rain did come, and again in 1857 the peasants and labourers suffered the opposite of drought, i.e. too much rain. The population again turned to the Crucifix and received the grace of the cessation of the aforementioned rains from 29th June. This confirmed the need for a processional event that would further bind popular devotion to the Crucifix with a sort of sacred pact. A sacred pact in the sense of protection of collective life from climatic and natural disasters, such as famine, which was very much felt in a peasant and labourer society, and a sacred pact in the sense of sacralisation of space. This has occurred over the course of time with the historical passing down between the different generations of the miraculous event of 1854. History indicates a remote complexity of senses in the event of a founding act, in the sacralisation pact that recalls the identity expressed in the cultural and biological anthropology of the human being” (from Frate Umile da Petralia e il Crocifisso di Cutro. Segno storico e segno teologico, Youcanprint 2013).