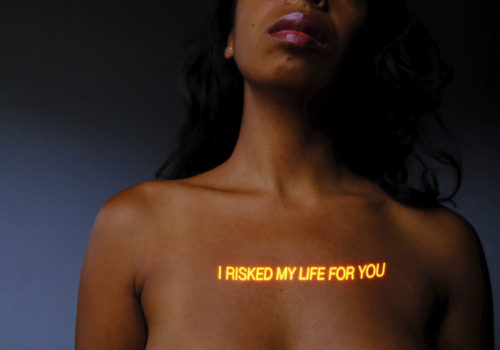 Fotografiska New York presents prepare my heart, a new solo exhibition from the interdisciplinary artist Kia LaBeija (who prefers the mononym “Kia”), born 1990 in New York City. While Kia has presented work in group presentations at the Whitney Museum of American Art, the Brooklyn Museum, the Studio Museum in Harlem, the Los Angeles County Museum of Art, and more, prepare my heart is the artist’s first solo museum exhibition and first New York solo show. The objects in the exhibition, presented in an interwoven manner, are of two distinct categories: Kia’s autobiographical contemporary artwork, and personal archival material.

Kia first gained recognition as a visual artist in 2013, by way of her membership in the Visual AIDS Artist+ Registry and subsequent inclusion in thematic group exhibitions. prepare my heart offers the most complex view of the artist’s life and practice to date, including but extending far beyond her important creative work in the HIV activism space.

“prepare my heart is my love letter to New York City,” said Kia. “I was born HIV-positive in 1990 among the shifting background of Times Square, the fight to change the CDC’s definition of AIDS to include women’s issues, and the life-saving medications that became available in 1996 – 15 years after the first reports of a ‘rare cancer effecting Gay men in New York and San Francisco.’ My mother, Kwan Bennett, was an AIDS activist, and fought for women, children and Families. Her death in 2004 at the age of 47 prompted my inspiration to continue her work to shift the AIDS narrative, a narrative that for decades has sat dormant. My coming of age story celebrates my mother’s legacy, my introduction to New York City’s Ballroom Scene, learning how to navigate my sexuality, notions of beauty, and finding love and partnership amongst my own internalized stigma – and the stigma of others. This exhibition is centered around my observation that preparation is a response to great trauma, and also looking for the balance between what is beautiful and what is painful.”

Kia’s curatorial decision to feature archival images and ephemera creates a visceral, artifact-driven layer of the exhibition, including signifiers of what it’s like to grow up HIV-positive. For instance, one object is a 1996 pamphlet that Kia had in her house, entitled “Facing the Fsuture: A Legal Handbook for Parents with HIV disease.” Notable archival images in the exhibition include childhood photos depicting moments like four-year-old Kia smiling against an ACT UP banner, and Kia’s mom speaking at a rally in Union Square Park with a young Kia seated next to her. prepare my heart also offers an intimate, behind-the-scenes look into New York City’s Ballroom scene, through documentation of Kia, her peers, and elder pillars of the Ball community.

Photographic self-portraiture, a key element of Kia’s practice, is another feature of the show; she remarked on it as follows: “I make theatrical self-portraits as a way to process grief and emotion, to escape ‘real life,’ and to explore the interconnectedness between fantasy, dreams, and memory. I am commenting on what it means to feel alone, to be a singular person in a world where the intersections of my identity are usually overlooked or not included at all. In my portraits, I like to dress myself in unique pieces that have already had a life of their own. Whether its thrifted or vintage, a hand-me-down or an important piece worn by someone I love. I stage each photograph in a meaningful location to retell or document something important to me. It’s taking control of my story in what is ultimately an act of self-love.”

One body of work in the exhibition, created between 2018 and 2021, deals specifically with Kia’s experience finding love amid the stigma of living with HIV. Combining her practices of poetry and photography, several of these intimate compositions depict Kia, sometimes alone and sometimes with her life partner of eight years, with small text projected onto bare skin. One work, I RISKED MY LIFE FOR YOU (2021), embodies the stinging statement that Kia recurrently encountered after previous sexual experiences, “before finding the true meaning of love in my partner Taina in 2014.” The complementary work to I RISKED MY LIFE FOR YOU is in SHE KNOWS AND SHE LOVES ME EVEN MORE (2021), a photograph of Kia and Taina with the piece’s titular text projected on the embracing couple’s skin.

The thematic series about finding love amid the stigma of living with HIV also includes a set of photos (one of which, Untitled #5, was on the cover of ARTFORUM in 2018) that depict Kia in black luminescent body paint and bright-red lipstick against a black background.

Said Kia, on her interdisciplinary creative practice overall: “As an artist, I work in many mediums. I consider myself an image-maker using photography, film and collage. A performance artist utilizing dance, movement, and acting. And a writer, poet and storyteller. I like to blur the lines between the ways I create. I see my photographs as performance and poetry all in the same.”

While Kia is not currently active in Ballroom (and is no longer part of the House of LaBeija), it served a substantial role in her life for ten formative years and commands a broad presence in the exhibition. In addition to her prestigious role at the helm of the Iconic House of LaBeija and her father-child mentorship with the late Ballroom legend Hector Xtravaganza, Kia’s Ballroom success has crossed over into mainstream pop culture in several ways. She served as a principal dancer in the pilot of the FX series POSE; has danced in a Calvin Harris music video; and starred in the 2016 music video, Dove, by Pillar Point, which has nearly 10 million views on YouTube. She remarked, of her relationship to Ballroom:

“As a young queer person of color, Ballroom was everything to me during the period I was immersed in it. I’ve always been a performer by nature, but what I could achieve as a professional dancer felt limited. When Voguing came into my life and I began to walk balls, I felt a newfound freedom. I had complete autonomy of how I wanted to express myself through movement within the language and art of Vogue. I arrived in the Ballroom scene from so many white spaces, that to be amongst people of color was like breathing fresh air. The familial relationships that emerged from my Ballroom life provided supplementary support exactly where I needed it, and exactly when I needed it.”

prepare my heart is curated by Meredith Breech, Exhibitions Manager of Fotografiska New York, in collaboration with the artist.

About Kia Labeija
Kia LaBeija (b.1990, New York) is an image-maker and storyteller born and raised in the heart of New York City, Hell’s Kitchen. Her multidisciplinary practice includes photography, performance, collage, writing, and film. She composes cinematic and theatrical autobiographical works by staging, re- imagining, and sometimes documenting in real-time–or all of the above. She has presented work at The Whitney Museum of American Art, The Brooklyn Museum, The Studio Museum in Harlem, The Museum of The City of New York, The Bronx Museum of the Arts, Los Angeles County Museum of Art, The International Center for Photography and the Performa ’19 Biennial.