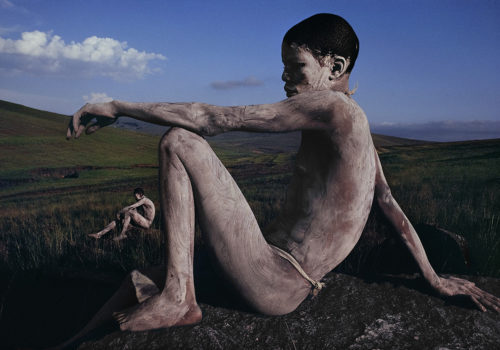 James Nachtwey is one of the world’s most respected photojournalists and is considered the defining visual war reporter of his time. An extraordinary observer and an acute witness, Nachtwey has devoted his career to documenting wars, conflicts, and critical social issues, and was recently in Ukraine documenting the atrocities of war in real-time. He has been awarded the Overseas Press Club’s Robert Capa Gold Medal five times, the World Press Photo Award twice, and been recognized with numerous other awards for his exceptional coverage of the events that shape our world.

Each photograph in this exhibition is a fragment of memory, captured within the continuum of the history Nachtwey experienced. Each image was intended to reach a mass audience at the time the events were taking place, as a way of raising public consciousness; one element among many in the process of change.

Now, as that same continuum moves relentlessly forward, and the events themselves recede in time, the artist’s hope is that these pictures will stand as a remembrance of the people in them, of the conditions they endured and of how those conditions came to be.

James Nachtwey (born March 14, 1948) grew up in Massachusetts and graduated from Dartmouth College, where he studied Art History and Political Science (1966-70). Nachtwey was influenced to become a photographer by images of the Vietnam War and the American Civil Rights Movement. He began his career as a newspaper photographer in 1976 and became a freelance in 1980. Since then, he has worked worldwide, committed to documenting wars and critical social issues.

Nachtwey has been a contract photographer with TIME Magazine since 1984. He was a member of Magnum between 1986 and 2000 and was one of the founders of the photo agency VII, where he was a member from 2001 to 2008, when he became independent. Nachtwey’s images focus on the impact of injustice and violence, yet they evoke a sense of compassion and sympathy. Within large-scale historical events of global impact, he documents intimate moments of humanity. His photographs can appear to have a formal completeness, but they are spontaneous, intuitive and often composed in a fraction of a second.