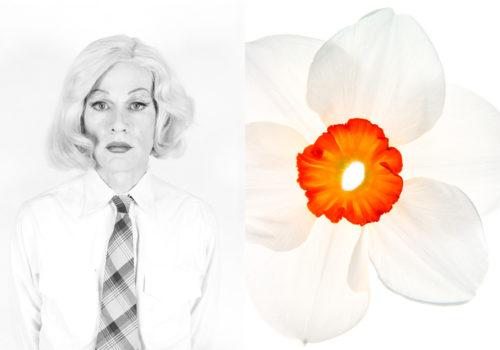 Artists Christopher Makos and Paul Solberg, aka the “Hilton Brothers”, present a joint exhibition: Andy In Nature. This unique exhibit features a selection of Makos’ photographs centered on an unexplored, yet rich dimension of Andy Warhol’s life his relationship with the natural world. These images will be exhibited alongside Paul Solberg’s well-known flower works. Their combined images bring a celebratory approach to the natural world that is made even more meaningful by the historic exhibition venue.

Christopher Makos was a close friend to and important influence on Andy Warhol in the 1970s and 1980s and his work documenting the eclectic world surrounding the “Factory”, and the vibrant New York social scene of that era, have been featured in scores of exhibitions, documentaries, and publications, including the recent critically acclaimed Netflix documentary “The Warhol Diaries” from producer Ryan Murphy. His new exhibit presents Warhol away from the Factory, away from New York, enjoying a restorative and deep engagement with the natural environment, at the beach, in the woods and in the Colorado mountains. The exhibit challenges the caricatured image of the commercial Andy Warhol, often seen as a plastic figure obsessed with consumerism, advertising and shallow society.

In this work a gentler Warhol emerges. He is seen relaxing at Eothen, his Montauk, Long Island, seaside home; enjoying Central Park where he found tranquility in the middle of Manhattan’s madness; and skiing on the slopes and through the forests in the Colorado mountains. Warhol’s connection to nature, as surprising and unexpected as some may find it, ultimately led him to bequeath his multi-million-dollar Montauk property to The Nature Conservancy, which established a preserve and visual arts program in his honor.

Makos work highlights this aspect of Warhol’s life and brings attention to Warhol’s commitment to conservation. Juxtaposed with Solberg’s vibrant images of flowers in bloom creates a stunning effect, made even more meaningful displayed in a building that is iconic to the conservation movement.

Solberg’s flowers in bloom make use of an ”O’Keefeian” play with a unique perspective. His exploration of the flower, as a symbol, in an isolated studio setting recalls the abstraction of Warhol’s own screen-printed Flowers series of the early 1970s. Solberg’s highly refined use of sophisticated lighting techniques renders the flowers with a clarity and texture that allow them to appear almost scientific, while retaining an unparalleled brilliance and beauty.

The exhibit is a departure for Makos. A famous urbanite himself, acclaimed for his documentation of the urban world around him: the artistic and literary life of Downtown Manhattan, colliding with the glitterati scene Uptown, and the coexistence of the two worlds, unique to 70’s and early 80’s Manhattan. In this exhibit, Makos strays completely from the city themes. Absent are the shots of Studio 54, the Mudd Club, and the bacchanalian excesses of the era. Instead, in Andy in Nature, we gain access to another dimension of Makos’s body of photographic work, as well as a more contemplative look at Andy Warhol: it is two friends on holiday- usually a work holiday for Andy- removed from the urban environments for which they are best known to inhabit.

Warhol’s influence is omnipresent with artists that came after him. Solberg is not immune from his hand, both for the Warholian business acumen passed down from Makos, and artistically, the merits of restraint and impact of scale.

Paul Solberg, whether it’s his ethereal portraits of human beings or flowers, his approach is the audacity of simplicity. Solberg leaves the subject nowhere to hide, distilling the singular essence of his subject with the brush of light. His process is as much the photographing of light as it is the protagonist in his frame. He luxuriates on his subjects; the skin of the flower given the same adulation as his human subjects. There is a scrutiny to his method, elevating the smallest flower into monument. There are three examples in this exhibition, from Solberg’s “Eight Series” (2008), where he has taken apart the original architecture of the flower, creating rolling landscapes, with light as the compass through the rolling hills of his ephemeral sculpture. You see a similar artist’s adoration for their subject in Georgia O’Keefe’s animal skeletons paintings against blue sky, or Warhol’s “Liz” or “Flowers” silkscreens, where the artist is taken somewhere irrational, elevating a subject as Idol. For Solberg, the message is clear: “to save ourselves, nature must once again be worthy of our worship.”

The third part of the exhibition weaves the three generations of artists with the 18-year collaboration of “the Hilton Brothers’, the moniker and second identity Makos and Solberg have shared since 2004. It’s the melding of contrasting perspectives to create another side to a story: as they did with Hippofolium (2005), We the People (2014), and in this exhibition, Andy Dandy (2007).

The Rosetta stone of Andy Dandy was the result of Makos and Warhol’s collaboration “Altered Image” (c.1981). Warhol’s appearance is with make-up and a wig, otherwise remaining in street clothes. It wasn’t drag, and it wasn’t changing gender, but rather, showing the potency of these symbols and how they shift perception. Makos and Warhol’s inspiration came from Rose Sélavy (1920), the collaboration of Man Ray and Duchamp decades earlier.

“Andy Dandy” (2007) is a series of twenty diptychs, which considers the rich association between Andy Warhol and flowers, creating a kinetic dialogue between Makos’ and Solberg’s work. Much like the “Altered Image” portraits, Solberg’s used an opaque white environment in his early flower work, providing a weightless transition between Andy and the flower, and the two bodies of work naturally found themselves connected on Makos and Solberg’s studio floor.

The exhibit pays homage to the history of the Conservation Movement, Milford as its birthplace and Forest Hall, where a generation of America’s first professional conservationists learned their profession.

The original part of Forest Hall was built in the 1860s and designed by Calvert Vaux, the co-designer of New York’s Central Park. In its original iteration, it included a residential painting studio used by masters of the Hudson River School, including Worthington Whittredge, John Weir, Jervis McEntee and Sanford Gifford. Forty years later, architects Hunt & Hunt (the sons of Richard Morris Hunt, who designed the façade of the Metropolitan Museum and the Statue of Liberty base and grounds) designed the rest of the building—where the Andy In Nature exhibit will be on display.

“Forest Hall”, is an iconic, architecturally important 19th century bluestone building in the heart of Milford, Pennsylvania, which is known as the birthplace of the American Conservation Movement. The exhibition remains open to the public until October 23. Just 90 minutes from NYC, this makes a great weekend getaway for New Yorkers looking for an art/nature excursion.

From an original text by Holly Fairgrieve.