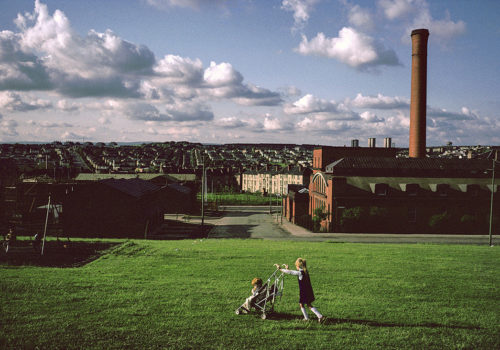 From October 15, 2021 to April 10, 2022, Triennale Milano and Fondation Cartier pour l’art contemporain present La vita moderna a solo exhibition by French photographer and filmmaker, Raymond Depardon. Bringing together three hundred photographs and two films, La vita moderna is the largest exhibition of the artist who, since the 1970s, has profoundly revitalised the world of the contemporary image. Specially created for Milan, the exhibition reveals, through many of his most emblematic series, how much Italy inhabits his work. Under the general direction of Hervé Chandès, La vita moderna was conceived with the participation of the artist Jean-Michel Alberola and set against a scenographic backdrop designed by Théa Alberola. Sharing a common vision of creation and the desire to transform the exhibition space into a place of reflection on the great challenges of our time, the two institutions have chosen, for the third exhibition in the programme, to dedicate over 1300 m2 of exhibition space to the work of a photographer-filmmaker who travels the world, through cities and countryside, giving a voice to their inhabitants and casting a humanist gaze on the world.

Constantly searching for the ideal distance from them, Raymond Depardon approaches his subjects with discretion and humility, patiently building a relationship with people or places, giving a voice to those who have none, showing each landscape as the site of a human experience through the lens of a camera or camcorder. His first images took him to Chad and Lebanon, from the north of the American continent to the south, to deserts and countries at war, when photojournalism was his way of travelling the world and engaging with reality. As a young reporter with the Dalmas agency, he was one of the co-founders of the legendary Gamma photo agency in 1966 and, a decade later, began work- ing with Magnum, of which he is still a leading member today. Presenting himself as “a passenger of [his] time”, he experiments with different ways of approaching the world – first with photog- raphy, then filmmaking – placing the image, whether still or ani- mated, at the service of a simple, unique, often direct narrative. Whether he is following a politician on an election campaign or a farmer in his daily life, whether he is visiting a courthouse or a mental hospital, Raymond Depardon is able to stand back and make room for the subject, without chasing the defining moment and preferring the real to the sensational. This way of experiencing the world, at first expressed through photojournalism, then, from the end of the 1970s, through more personal photographic series, gives him a special place in the history of photography and cinema.

The exhibition La vita moderna shows the richness of Raymond Depardon’s work, the diversity of his subjects, and the coherence of his journey, through eight photographic series, two films, and the books he has published. Borrowing its title from the film that concluded the Profils paysans trilogy in 2008, the exhibition leads the visitor through a succession of questions that run through the artist’s entire body of work: Which subjects call for colour and which for black and white? How can the transformations of a landscape be evoked in an image? Where should the photographer stand and what is the ideal distance from the subject? How can we detach ourselves from the event to reveal the margins and borders? What is modernity in photography when you walk through a rural area or cross the streets of a post-industrial city? Here the dualism – between black and white and colour, between faces and landscapes, between ancestral land and modernity – does not lead to polarisation, but reveals an attention to the world, a curiosity in motion, an open approach to the diversity of our age. The first series in the exhibition, Errance (1999-2000), is also the leitmotif of the entire exhibition, a movement towards an elsewhere that is already there, a continuity beyond borders, a universal affinity, a familiarity in otherness. Images of roads and thoroughfares, streets and rail tracks, where the journey becomes vagabondage, give life to landscapes that have been deliberately stripped of any indication of a precise location. Italy occupies a particular and recurring place in the geographies of the margins of the world that characterise Raymond Depardon’s entire body of work. There, the artist has produced several series, such as Piemonte (2001), in which he developed an “art of affinity”, emphasising transalpine geographical and cultural continuity. Far from investigating the differences, it is through the memories of French landscapes that he perceives those of the Turin region. Like an echo, on the other side of the Alps from Piedmont, the villages of the Mediterranean hinterland reveal cobbled streets and houses with cracks along the walls in the photographs from the Communes series (2020), which offers a timeless image of these areas of southern France that miraculously escaped a shale gas extraction project that was later abandoned. A pho- tographer of the South, the Mediterranean, deserts, and Africa, Raymond Depardon also admits to being attracted by the North and its light. A documentary led him to Glasgow (1980) where he photographed children, little kings of the streets, the homeless, and fights, capturing in colour the inertia of an almost mono- chrome city. That same year he photographed New York, travel- ling through the city, staring through the lens of the Leica he wore around his neck: the bold shots from the Manhattan Out series (1980) evoke urban loneliness and individualist indifference. The city eluded him, it felt “too powerful”, impossible to film, as his voiceover states in the short film New York NY (1986). The desire to engage with “public space”, “the space of experience” cata- pulted him into a major project: to photograph France, to draw a contemporary portrait, with a 20 x 25 camera, that is frontal and in colour. Raymond Depardon’s La France (2004-2010) is the ordinary, everyday France of subprefectures, of squares and bars, of post offices and petrol stations. Another France is revealed in his Rural series (1990-2000) – exhibited here for the first time – for which the artist travelled through the countryside, meeting farmers, talking about the land and the men who cultivate it, stopping in the courtyard of a farm, rediscovering the rural world that had been one of his first subjects. Emphasising the fragility of small businesses, his photographs capture and bear witness to a political and ideological dimension. This insight can also be found in the collection that brings the exhibition to a conclusion, San Clemente (1977-1981). For this series – encouraged by Franco Basaglia, a pioneer in modern psychiatry – he photographed life in psychiatric hospitals in Trieste, Naples, Arezzo, and Venice, thus creating a shocking reportage on the eve of the adoption of Law 180 in 1978, which was destined to revolutionise the Italian psychiatric hospital system. The film San Clemente (1980), shot in the asylum on the Venetian island shortly before its closure, continues the exploration of the frontiers of madness and casts on the patients that humanistic gaze that characterises all of the photographer’s work.

The exhibition La vita moderna also brings together Raymond Depardon’s publications, highlighting the importance of this aspect of his work and his way of perpetually rethinking his photographic journey – his purpose, his technique, the challenges he faces – starting with Notes (1979), which the artist considers to be one of his seminal books, through to Rural and Communes published by the Fondation Cartier in 2020 and 2021.

Specially created by Raymond Depardon for Triennale Milano, La vita moderna was conceived with the participation of artist Jean-Michel Alberola, who gave his own rhythm to the exhibition and introduced colour into the spaces with set designer Théa Alberola. The exhibition design is rhythmed by monumental prints taken from the Errance series, which invite us to explore the relationship with the landscape and participate in the search for the most suitable distance from the subject. In his paintings, Jean-Michel Alberola often spills beyond the space of the canvas, letting colour escape onto large painted walls, while in his exhi- bitions, Raymond Depardon often reflects on how to show his films and how to present his photographs. Together, they found in the spaces of Triennale a new way of exploring dimensional contrasts and creating an interaction with the visitor.