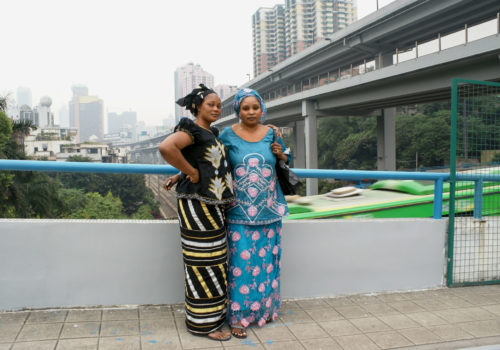 South China’s Coastal economic powerhouse Guangzhou is one of the Chinese metropolises that has always had relatively significant overseas communities. According to the local government, among the eighty thousand registered foreign residents in Guangzhou in 2016, sixteen thousands of them are from Africa. The other nationals are from South Korea, Japan, USA, India and Canada. Economists have traced the coming of Africans to Guangzhou city to two main causes: first, the discovery of plastic containers made in China in the late 1980s that revolutionized daily life in Africa, the cheap and user-friendly plastic container has quickly replaced the cumbersome traditional jars made from clay used to fetch water for example. Second the rise of Guangzhou as a major international trading center when the “Canton Fair” became the household name for traders all over the world, and a paradise for “sourcing”, the magic word that solidly established China’ status as the factory of the world.

Larger and larger number of African traders flocked to Guangzhou, looking for the Chinese Dream, eventually including trading in fake goods (a phenomenon unknown in Africa until the 2000s). Most of the African migrants have concentrated in the neighborhood around Xiaobeilu in downtown Guangzhou (literally Little North Road) which soon gained such nicknames as “Little Africa”, “African Street” or even “Chocolate City”.

Today this population has been dwindling since the heydays, different past estimates have put the number of legal and illegal African migrants up to two hundred thousand at their peak, during the decade that lies curiously between two epidemics: the SARS epidemics of 2003-2004 and the Ebola crisis of 2014.

The departing of African migrants in recent years stem from a combination of factors, Chinese urban administration’s decision to modernize and gentrify further the neglected neighborhoods (called “beautification”), the increasingly unfavorable dollar-renminbi exchange rate, higher police presence and crackdown on illegal immigrants through incessant passport check, and most of all, more outspoken racism from the local Chinese people.

That is the context of Daniel Traub’s new book, Xiaobeilu, or Little North Road, edited with the help of Robert Pledge of Contact Press Image. Daniel has been documenting China since the 1990s, a Brooklyn based photographer and filmmaker whose work has often explored marginalized communities and landscapes in the midst of crisis and transformation. Daniel’s mother is Chinese, so he speaks fluent Mandarin. What makes his Xiaobeilu project unique comes from his discovery of two Chinese street photographers, “street” means making a living out of shooting tourist or passer-by for a fee. The two guys, Wu Yongfu and Zeng Xianfang, have specialized in targeting the Africans who were in need of souvenir pictures to send home. Wu and Zeng worked independently but in the same place, on an overpass – a pedestrian bridge near the Little North Road or Xiaobeilu in Chinese, they were equipped with a portable printer, so they could offer almost instant snapshot to the passing African clients for 10RMB (less than 2 USD). That was the treasure trove Daniel Traub has found, series of portraits of African posing alone or in couple or groups of friends, stored in their memory cards that would be emptied out by the end of the day. Daniel acquired the content with their consent. The result is a collection of over a hundred thousand of images of these truly vernacular photographs, lost and found nearly discarded portraits of anonymous Africans in China. Combined with his own documentary photograph and videos Daniel is now finalizing a multimedia project on this amazing microcosm in fast changing China.

Looking at these images, especially knowing that these scenes can no longer be reproduced at this place in our time, I had a strange sense of decalage, a feeling of jetlag or “lost in translation”… it is almost like transposing the greatest Malian photographer Seydou Keita’s African portraits in a Chinese urban metropolitan environment. As Robert Pledge remarked: “why are these smartphone-carrying African visitors choosing to be photographed rather than take selfies that they could easily share with family and friends back home? Is it an African trait of social self-representation to prefer being defined through “the other” or a griot of sort – in this case, local Chinese photographers – rather than engage in a more “egocentric: practice to sing praise of themselves?”. Still, something does not seem to fit, as we are completely there, standing right in the middle of “globalization”, when Chinese are buying and selling allover in Africa, the African traders are here in China buying a portrait of themselves by Chinese photographers, as if they were perpetuating the tradition of paying a Seydou Keita or a Malik Sidibé to get their printed photograph, that’s fair trade ! This photograph is the real solid and tangible proof that they have been in China, and that is something a selfie with smartphone cannot replace.

As I look again and again at the African portraits by these two Chinese photographers, the song “An Englishman in New York” came up in the back of my mind, and I just couldn’t help borrow some of Sting’s lyrics:

Jean Loh is an author specializing in photography based in Shanghai, China.