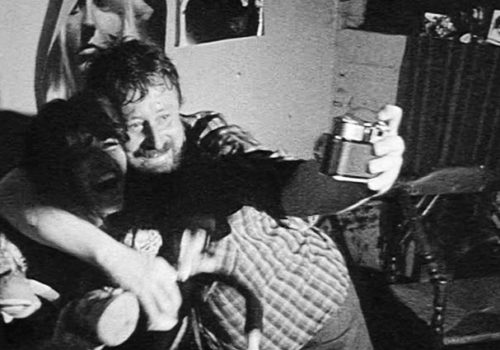 His attitude is typical of the street photographer, greedy and insatiable, carried away by a kind of creative fury. Yet, unlike the all-time champions of this category, he is not omnivorous. He does not avidly capture whatever passes in front of him and stimulates his primordial impulses.There is no pitiless and predatory gesture. He is no hunter. Fieret never claims any superiority over what he manages to include in his pictures. His photography is not a statement of authority. Unlike those of Garry Winogrand, his women do not seem to be dominated by the presence of the photographer, but on the contrary, they establish with him a special link and collusion. Fieret does not photograph instinctively; he does it out of love. He literally uses his camera to have an intimate relationship with the women he frames in his lens. There is no perversion, but rather deep respect. He surrenders to their eyes and their bodies with deference and awe. If a portrait is also a matter of power, like the relationship between the two halves of a couple, here the power wholly belongs to the person sitting in front of the lens. Quite unlike a pornographer seeking to prey on defenceless young women, Fieret is an unredeemable romantic: his photographs are the equivalent of gentle compliments in the context of some eternal courtship.

Fieret uses photography as a means to touch. Like a little boy intent on getting to know the world. Each and every detail is a hand stretching out. Fumbling. Experimenting. The self-portraits, which he piles up in profusion throughout his career, perform the same function. They are spaces in which he states his own identity, just like the stamps and signatures popping up everywhere, but they are also instruments he uses to know himself. Self-analysis. Facing the lens or in profile, with or without a camera, taking the pose or not, inside or outside his studio (where the presence of some of his own photographic work often contributes to his self-representation), Fieret is discovering himself. Stroking himself. Beyond any kind of documentation, he pursues his task of digging out reality. Through an excess of flesh and matter, what emerges is not the subjects themselves (the things per se), but Fieret’s own relationship with them.

A few kinematic sequences, usually made up of similar pictures set close together and printed on a single page, constitute the apotheosis of Fieret’s tendency towards repetition. As they confirm his inexhaustible experimental vein, they strike us more than anything as the utmost possible thinning out of a narrative sequence. Everything happens between A and B. Beginning and end are cheek by jowl. There is no plot. No storyline. There are only two photographs and the emptiness between them. At the same time, they testify to Fieret’s absolute idiosyncrasy with respect to rejection. He never eliminates anything. Not even mistakes. If there are two similar pictures, they are equally interesting variants, singly or as a pair. This is also true for the prints. Not only can there be different versions (even on a very large scale) of the same picture, large or small, light or dark, solarized or not, but there are no rules, not even in terms of preservation. Old prints, worn-out, damp, soiled, are always acceptable. Fieret, who never bothers in the least about protecting his prints, piling them up any which way, leaving them in direct sunlight, letting his cat run around on them, is eager to welcome the objects’ stories, from their birth to their death. The results are unique pieces. But it is also a multitude of bits of paper which decay, just as his own body is decaying, with perfect symmetry, beyond every myth of eternity (of photography and all the rest). By way of a process that is as irretrievable as it is poetic.