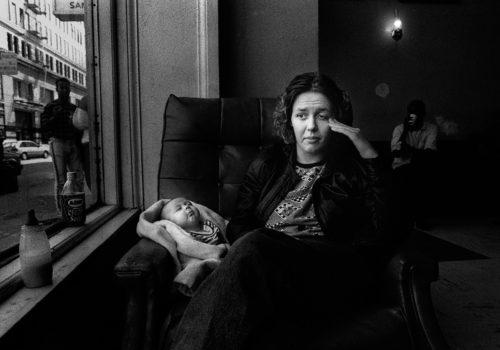 In 1993, Darcy Padilla met Julie Baird during a reportage during which she followed a doctor on his rounds at the Ambassador – a hotel in the Tenderloin district of San Francisco which served as an annex to overcrowded hospitals. Once this reportage over, she decided to return to this hotel to follow the people with whom she had established a strong relationship.

She had never imagined that February 28, 1993 would mark the beginning of a long photographic project during which she would follow, as closely as possible, eighteen years of Julie’s life, from the alleys of San Francisco to deepest Alaska. From there was born the Julie Project, a series of black and white images that tell the tragic fate of this young woman, her children and the men who surrounded her. The birth of Rachel, the successive pregnancies, the placement of the children in foster care, the fight against illness, are all episodes in Julie’s life that these images recount with modesty and accuracy. In this both documentary and intimate approach that begins the day they met and ends with Julie’s death, Darcy Padilla bears witness to poverty, broken families, drug addiction, AIDS and violent relationships.

“I met Julie for the first time on February 28, 1993. Julie was 18 years old, and was in the lobby of the Ambassador Hotel, barefoot, open pants and carrying an 8 days old child in her arms. She lived in the SRO (Single Room hotel) district of San Francisco, a place with cheap accommodations and small soup restaurants. Her room was filled with clothes tossed on the floor, among ashtrays and garbage. She was then living with Jack, the father of Rachel, her first daughter, who made her HIV positive. She left him a few months later to stop taking drugs.” Darcy Padilla

American photographer based in San Francisco, Darcy Padilla is part of the tradition of social and documentary photography. She photographs the homeless, drug addicts, the marginalized. She became “committed to the poor” as defined by Emmanuel Carrère, French writer, screenwriter and director.

From 1993 to 2011, Darcy Padilla followed and photographed the life of Julie, who is now deceased. A young woman with AIDS, she lived alone in extreme poverty and then became the mother of two children whom Darcy now accompanies… For this exceptional work “Julie 1993-2010”, she received several awards including the W. Eugene Smith for photography charity, the John Simon Guggenheim Memorial Foundation and the Getty Images Grant for Editorial Photography in 2010, then a World Press Photo in 2011.

In 2013, she obtained a grant from the Photoreporter festival in St Brieuc for her work on shale gas, the black gold of North Dakota. Her latest works focus particularly on the United States.

In 2014 Éditions de La Martinière published the book “Family Love” which brings together photographs from the series “The Julie project” and unpublished texts by the writer Emmanuel Carrère.

Darcy Padilla has been a member of Agence VU’ since 2012