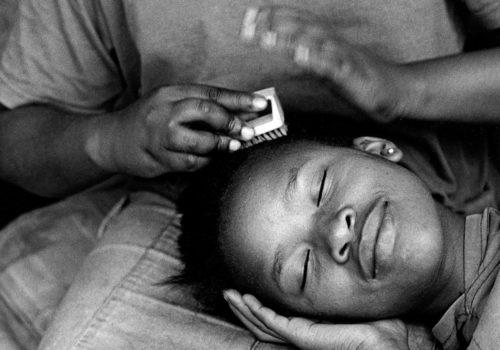 “My work in South Africa was a coincidence. As I explored amateur boxing in the United States and abroad, I was led to visit the Luyviso Club, housed in an old neighborhood house converted into a gym, in Khayelitsha, a township 40 kilometers of Cape Town. Since 2004, I have visited the traditionally black townships of Langa, Khayelitsha, Philippi, and Gugulethu more than a dozen times. I have photographed overcrowded classrooms, the emergency room of a public hospital, thriving young churches, the streets of difficult neighborhoods and the homes of those who live there. My photographs bear witness to the perseverance of these South Africans who, despite endemic violence, deep economic distress and still-vivid racism, have kept all their dignity, hope and courage. There, away from the cities where tourists and businessmen flock, in these townships teeming with life, I found in the people I photographed beauty, strength, and humanity in all its contradictions: a preacher’s sermon before a captivated congregation, the embrace of a loving couple at nightfall, Sindi’s pride in her traditional Xhosa dress, the pain of mourning at the funeral of a young Sotho, the shocking traces of violence on the bruised face and body of a woman, the poetry and grace of a young girl dancing on a mild Sunday afternoon.

From my first project (on Basque life and culture in southwestern France) to this one, I have worked in the tradition of humanist photographers, such as Dorothea Lange and Walker Evans, striving to make images that arouse empathy and change the social gaze.” -Anne Rearick

American photographer, member of Agence VU’ since 1993, Anne Rearick lives and works in Gloucester (Massachusetts, USA). A Fine Arts graduate of the Massachusetts College of Art in 1990, she has since worked as both a teacher and a photographer.

In the great tradition of American documentary photography to which she adds her uniqueness, she works on long-term subjects, deepening the relationships with the people and places she captures over time. Her photography depicts the daily experience of the universes in which she immerses herself, and which she celebrates with delicacy.

In the United States, in South Africa and in the Basque Country, Anne Rearick takes this same generous look at people to give images that want, above all, to express the pleasure of the moment and the quality of the encounter.

Rewarded with numerous prizes, such as the Guggenheim Fellowship Prize, the Dorothea Lange — Paul Taylor Prize or the Roger-Pic de la Scam prize, her photographs have been included in major public collections such as those of the National Library of France, the National Audiovisual Center of Luxembourg and the Museum of Modern Art in San Francisco. Anne Rearick is also represented by the Clémentine de la Féronnière gallery (Paris)